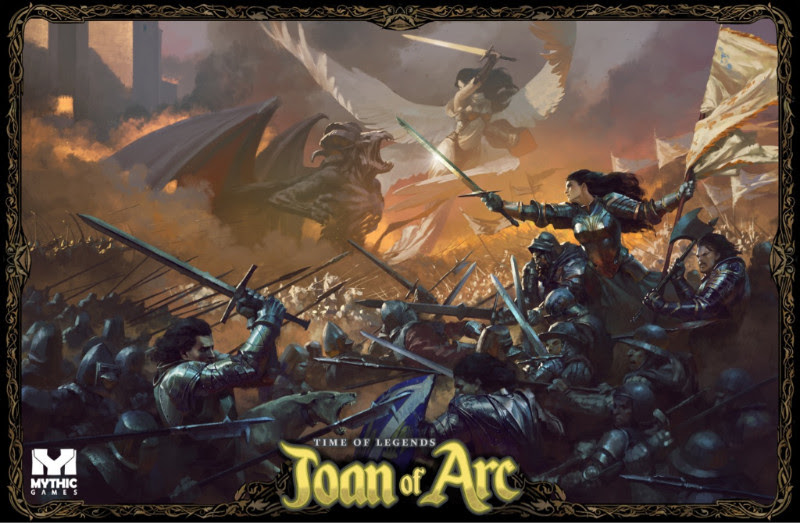 Last year Mythic Games completed their Kickstarter for Mythic Battles: Pantheon to impressive results.  With large figures and a Greek theme, it raised over $2.6 million.  Soon they’ll have a new Kickstarter based on Joan of Arc, and those attending Gen Con will be able to play it first.

Mythic Games, creators and co-publishers with Monolith of the Mythic Battles: Pantheon Board Game, announce today the studio’s return to Gen Con (August 17 – 20, Indianapolis) to debut their latest creation, the Time of Legends: Joan of Arc board game. Gen Con attendees will be the first in North America to play Joan of Arc, as well as play the forthcoming Mythic Battles: Pantheon Board Game from last year’s multi-million dollar Kickstarter.

The Time of Legends: Joan of Arc board game centers on Joan of Arc’s heroic tales during the 100 Years War, a medieval universe of war, conspiracy and betrayal, where myths mix with reality. Throughout the game, the beliefs of the era become real, where witches, werewolves, dragons, devils, angels and other mythical creatures mingle with knights, inquisitors and peasants in a game environment that spans roleplaying in a small village to a mass battle involving dozens of knights, warriors and terrain.

“We’ve created a truly unique miniatures board game experience by mixing unusually small miniatures with spectacular 3D terrain and what we think is the biggest miniature to take over the tabletop – our incredible dragon with its massive 21-inch wing span,” says Leonidas Vesperini, Mythic Games’ project manager. “Time of Legends: Joan of Arc brings players to a time of epic battles and fantastic myths, where history meets magic, centered on the original wonder woman. We can’t wait to demo the game at Gen Con 50.”

Time of Legends: Joan of Arc is designed to play through in less than an hour with an unusual small scale of 15mm plastic figures with unprecedented detail and definition. This size allows for spectacular scale effects with massive armies for each player, 3D environmental pieces such as houses, church, bridges, trees and castles, and gigantic creatures. While supplies last, attendees who demo Joan of Arc in the Mythic Games booth (#3063) will receive a free collectible button.

Time of Legends: Joan of Arc launches on Kickstarter October 10, 2017.

I can’t remember Joan of Arc being used as a theme in recent memory.  The dragon looks spectacular as well.  Be sure to check this out if you are at Gen Con!