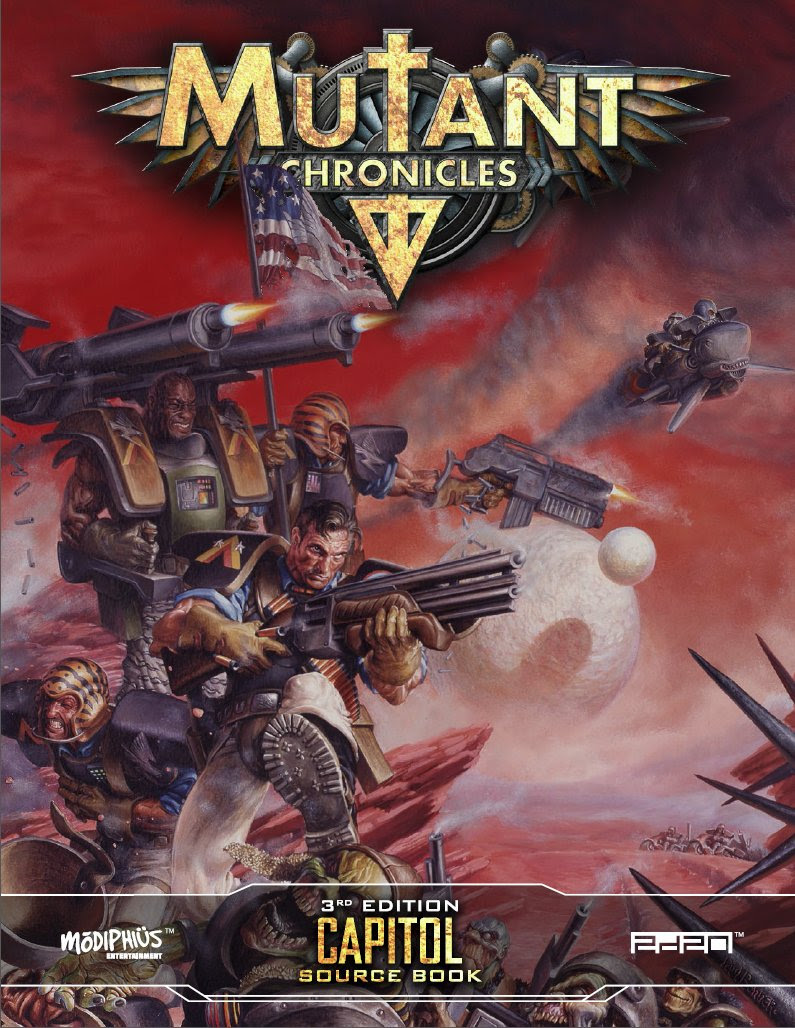 Modiphius Entertainment continues to support its post-apocalyptic dieselpunk RPG Mutant Chronicles. Now players can from the perspective (or working against) two of the dark universe’s mega corporations: the Capitol and the Imperials.

In the Capitol Source Book you’ll discover the secrets of the capitalist mega corporation who were first to the stars, first upon Luna, and first upon Mars. Capitol is the largest corporation, and the most prosperous, and claim success comes from the freedom of its populace. In no other corporation could an ordinary citizen rise to fame, fortune, and power so easily, but the price of freedom is a high one…

* Freedom: What characterises the average Capitolian? Discover the culture of consumerism, self-determination, and fame-seeking that exemplify the best of Capitol, and the darker side of freedom that threatens to undermine society.

* See the Sights: Discover the secrets and perils of Mars, the Capitol homeworld, and the corporation’s holdings on Venus and Luna.

* Learn about the inner workings of Capitol, with its countless elected officials, and how fame and money influence the most democratic of the corporations. Discover the workings of the Armed Forces of Capitol, and their constant battles against both envious rivals and the Dark Legion.

* Character Creation: Expanded rules for the backgrounds and professions unique to the Capitol corporation.

Scattered across the solar system, the Imperial corporation is united by mutual ambition. The disparate and eclectic Imperial Clans are perpetually moving to acquire new territory and new companies, and war is simply one means to that end. Plagued by a dark and bloody history, Imperial focuses its determination and its ambition outwards, to rival corporations and the Dark Legion…

* The Clans: What defines the Imperial people? Discover the cultures of the corporation’s numerous Clans and the history of strife and struggle that defies them.

* The Holdings: Discover the territories of Imperial, scattered upon Mercury, Venus, Luna, Mars, the Asteroid Belt, and beyond.

* The Serenity and Parliament: Learn about the inner workings of Imperial, from the Serene Leader and Houses of Parliament, to the complex bureaucracy that keeps everything running, to the agents of Imperial Security Command, and the doughty soldiers of the Ministry of War.

* Rune Lore: Uncover hidden secrets of Runecraft and alchemy, which give the ferocious Wolfbanes an edge against the Darkness.

* Character Creation: Expanded rules for the backgrounds and professions unique to the Imperial corporation.

More information on Mutant Chronicles and all of Modiphius Entertainment’s projects can be found on their page.