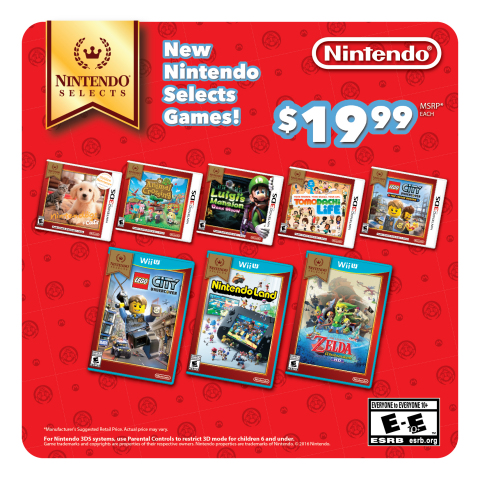 Today, Nintendo announced five 3DS and three Wii U games to receive its Nintendo Selects branding on August 26, which retails at $19.99. Animal Crossing New Leaf, Luigi’s Mansion: Dark Moon, Tomodachi Life, nintendogs + cats: Golden Retriever and New Friends, and Lego City Undercover: The Chase Begins for the 3DS as well as The Legend of Zelda: The Wind Waker HD, Nintendo Land, and Lego City Undercover for the Wii U will be receiving a rerelease.

Additionally, Yoshi’s Wooly World, Mario Party 10, and Captain Toad: Treasure Tracker for the Wii U will be packaged with amiibo figurines for $39.99 on September 9. Both Yoshi’s Wooly World and Mario Party 10 will both have two separate bundles featuring different amiibo, while Captain Toad: Treasure Tracker will be packaged with a Toad amiibo.