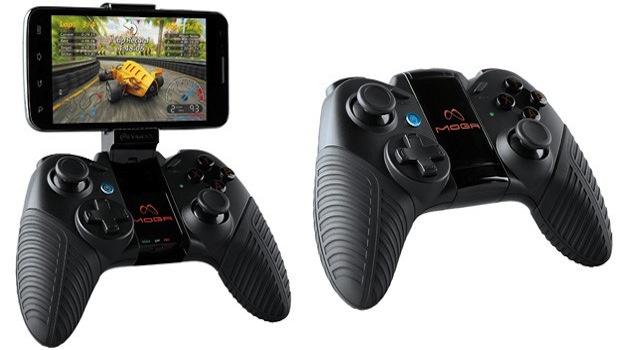 For the first time, gaming enthusiasts in search of that elusive console-like feel on their mobile devices will be able to get their hands on a revolutionary controller custom-made for your Android – the MOGA Pro Controller, which is available for purchase starting today. Looking a bit like a cross between an Xbox and Playstation controller while maintaining a look all its own, the MOGA Pro allows you to clip in your smartphone (using Bluetooth support) and play games with the precision and feel previously lacking in touchscreen-based gaming interfaces.

The MOGA Pro aims to emulate all your favorite features that were only available with console games – until now. Among the device’s more prominent features, you’ll be able to get your thumbs on dual, clickable analog sticks, sweat-proof rubber grips for each hand, along with the all-important directional pad, shoulder buttons, and shoulder triggers. Furthermore, the release of the MOGA should create a perfect storm of developer incentive for new titles, with heavy-hitters such as Rockstar, Gameloft, SEGA, and many more looking to capitalize on the new functionality the controller provides. Some of these games that were previously relegated to the realm of consoles will now be on the horizon for the Android, including Grand Theft Auto: Vice City, Jet Set Radio, Sonic CD, and dozens more that will be released each month.

The original MOGA, a pocket-sized controller with a slightly different design, was released to great fanfare in October of last year, and the Pro version seems poised to build off the success of its predecessor. For a complete list of games that are compatible with the MOGA Pro interface, check out www.MOGAanywhere.com, where you’ll also find links to order the controller from Amazon. It currently supports Android 2.3 (Gingerbread) and higher, and retails for $39.99, both online, as well as in stores such as Best Buy, Walmart, Gamestop, and many more.