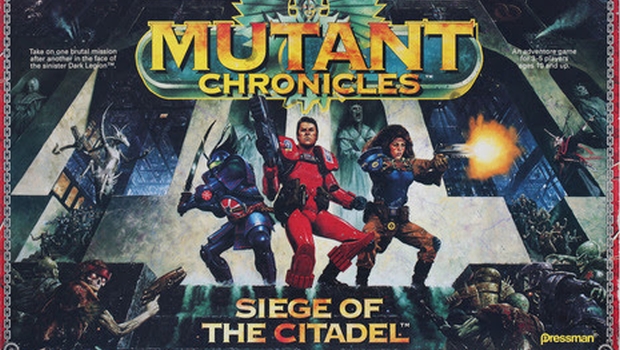 Modiphius had a successful Kickstarter campaign for the Mutant Chronicles RPG in 2014.  While getting together for an RPG may appeal to many, sometimes it’s just nice to break out a board and get into a game quickly without creating characters.  It now looks like Modiphius will be bringing back a classic Mutant Chronicles game, Siege of the Citadel.

Modiphius & Cabinet Entertainment have joined forces to re-boot one of the most epic miniatures boardgames, Siege of the Citadel.

Originally designed by the team at Target Games in Sweden and then developed by Richard Borg at Pressman Toys, Siege of the Citadel became a worldwide hit with its lavish components, high quality plastic figures and innovative rules.

Modiphius & Cabinet Entertainment have assembled an all-star team of designers to work on the re-boot including Richard Borg, Eric Lang and Kevin Wilson, along with cover artist Adrian Smith, and a sculpting team of Prodos Games and Paolo Parente.

Siege of the Citadel was a major release by Pressman Toys in the 90’s and is set in the Mutant Chronicles universe, where players control one of five corporations: Imperial, Cybertronic, Mishima, Capitol, or Bauhaus. Each player begins with two of their own unique Doomtroopers who both benefit from their Corporation’s special ability. The players must prevent the Dark Legion and one of its vile leaders, the vile Nepharite, Alakhai, from conquering the solar system.

Each successful mission brings news monstrous foes and terrifying events as the heroes explore the modular Citadel whilst events can help or hinder their missions. Promotion give credits to access more powerful weaponry and abilities whilst secret missions can cause chaos for the heroes!

In the new edition, narrative led designs will build on the original gameplay mechanics and campaigns based on major events from the Mutant Chronicles universe will expand on the much loved game. We will be unveiling more about plans for the game over the coming weeks and months, sign up to be the first to know!

Grab a Punisher Shortsword and Plasma Carbine, strap on your shoulder pads and make your mark in the Mutant Chronicles!

Siege of the Citadel will be launched at Essen 2016 and in retail from October 2016.

That’s a powerhouse of developers with Richard Borg, Eric Lang, and Kevin Wilson included in the development.  While I wish we didn’t have to wait until October 2016 for this, I believe it will give them plenty of time to create a great game.