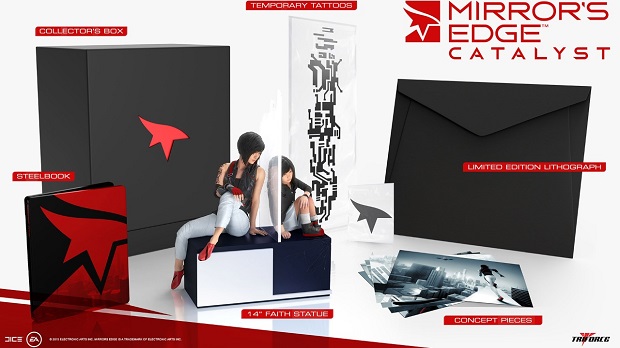 DICE and EA have revealed Mirror’s Edge: Catalyst’s special edition and all of its contents.

The Collector’s Edition (pictured above) will run you $199.99, and includes a steelbook case, concept art, a limited lithograph (that isn’t actually shown in the announcement), temporary tattoos that resemble those of protagonist Faith, and a 14-inch statue depicting both an adult and child version of Faith all wrapped up in a collector’s box.

As of this writing, this version of the game is only available at GameStop, with other retailers “to be announced soon.”

Mirror’s Edge: Catalyst is coming to PC, PlayStation 4, and Xbox One on February 23rd of next year.