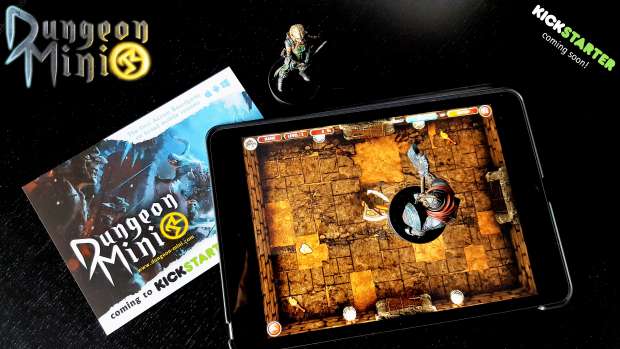 While we’ve seen apps being used with board games, we haven’t seen them directly directly interact with each other.  Golem Arcana might be the closest interaction with miniatures and tablets with the use of microdots and a special stylus.  While Playtable plans on enabling game pieces on a large screen, it will need special hardware.  Now Dungeon Mini has arrived on Kickstarter which lets you play miniatures on your own tablet.

Imagine what it would be like to play a fantasy RPG adventure where your mini figurine directly controlled the actions of your character… Today, Ynnis, an independent French publisher of board and video games, announced its next steps for Dungeon Mini, the first real-time action board game for tablets. Dungeon Mini offers a new way to play tabletop-inspired dungeon adventures using a physical mini figurine to control character movement and actions. The project is a tribute to classic role-playing games that uses custom technology to allow figurines to interact with rich dungeon environments shown on a touchscreen from a top-down view. Players can help bring the game to life and reserve their own paintable figurine controller and game software by pledging support on Kickstarter starting today.

As shown in today’s new video trailer, Dungeon Mini is a hybrid experience, both an interactive board game and a video game with a playable, high quality mini figurine that replaces a game controller. In traditional pen and paper roleplaying games, players often use figurines to represent their character’s location on a battle map. Dungeon Mini takes this a step further. Players will slide their figurine to navigate a trap-filled dungeon floor, rotate their figure from side to side to swing their axe at a goblin or turn to block an attack with their shield—whatever the figure does in your hand is what it does in the animated game world shown on the tablet screen.

“Dungeon Mini transports players into dungeon crawling adventures where you can bring your mini figure to life in a real-time fantasy world,” said Cedric Littardi, Creative Director and CEO at Ynnis. “It combines the tactile experience of controlling a figure in a board game with the rich visual feedback of video games for a unique new experience—one that players can help us make into reality.”

In development for more than 12 months, Dungeon Mini now seeks the help from fans and the community around the world via a Kickstarter campaign with a goal of $90K. The purpose of the crowd-funding will be to enable Ynnis to complete its innovative passion project, with supporters helping to shape the final product and receiving early benefits.

In Dungeon Mini, players will thwart traps, defeat monsters and collect treasure while trying to stay alive and find the exit. Wielding their mini, players will fight through dungeons with their favorite character such as an axe-wielding Dwarf melee fighter or a ranged female Elf maiden, adjusting their strategy according to the unique abilities of each hero. The Dungeon Mini game, which is designed for iOS and Android tablets with a 7” screen or larger, will allow players to explore many rooms, exploring their secrets as they try to make it out of the perilous Dungeon of Maleferus. Riddles and puzzles can be solved and monsters can be defeated using weapons or spells, all initiated by interacting directly with the figurine or using your fingers on the screen to draw spells or target ranged enemies. Additionally, characters and equipment can be personalized using card sets. The core game is single player, although there are stretch goals for multiplayer options and additional character types. Each mini represents a single playable character, and players can switch characters as needed.

Technology developed by Volumique allows each figure to come to life without any onboard electronics or battery. Instead, natural current from the player’s hand is transferred to the capacitive screen via three heat points located under the base of the model. Thus, the position and rotational angle of the figure are recognized in real time, allowing the figure to interact with monsters, environmental hazards, doors, etc. Each mini comes unpainted, allowing players to personalize their own beautiful hero figurines by painting them—just as is traditionally done with roleplaying figurines.

It looks like a unique system, and I’m curious how it will scale to different size tablets.  Check out the Kickstarter to find out more.