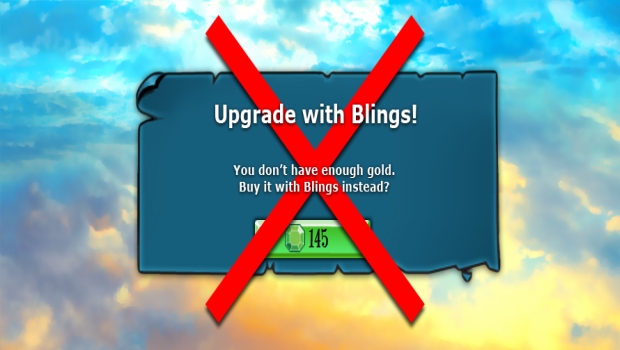 We did a deep preview for The Mighty Quest for Epic Loot and expressed some concern over the monetization system known as “blings”.  Well, the team at Ubisoft have taken a look at this system as well and have done the right thing – removed the Pay to Win premium currency mechanic.  Here’s what they had to say on the subject:

As many of you have noticed, we recently made some changes on how and where we let players spend the game’s premium currency, Blings. The reaction has been rather major and instantaneous: many of you have said that this change has affected the game to a point of causing it major harm – a lot of you feel that the game has become Pay to Win or unbalanced and this is not something that we think is acceptable.

We’re here today to let you know that we’ve heard your concerns and are acting on them immediately. We realize that letting players purchase machinery upgrades went too far in what we think feels fair to monetize. We are hereby rolling back the major premium currency mechanic changes, which will arrive in game in an upcoming maintenance.

We want to take a moment to thank everybody who took the time to express themselves on this issue. Your feedback and continued support has been and will continue to be the backbone of our game. The Mighty Quest is an adventure that we continue to create together.

It’s good to see the team taking public feedback seriously, and it spells well for the overall balance in the game.   Stay tuned as we continue to cover the game running up to the launch later this year.

The Mighty Quest for Epic Loot is free-to-play and currently in Closed Alpha on the PC.