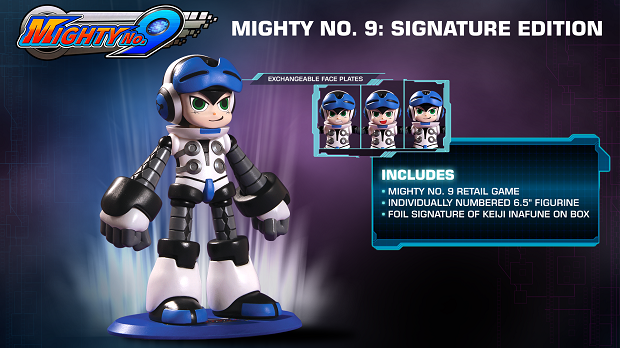 The “Signature Edition” will run fans $59.99, and will come with a 6.5 inch tall statue of the game’s protagonist Beck, as well as three interchangeable faceplates to customize his expression. The packaging of this limited edition will contain a foil signature from game creator Keiji Inafune.

Other announcements for Mighty No. 9 include the confirmation of cross-buy support across PlayStation 4, PlayStation 3, and Vita, meaning that buying the game on any PlayStation system will allow you to download it on any other platform at no additional cost. Mighty No. 9 carries the distinction of being the first non-first-party title on PlayStation platforms to offer this to those who buy the game at retail alongside games like PlayStation All-Stars Battle Royale and Sly Cooper: Thieves in Time.

Alongside these announcements, a new trailer has been released for Mighty No. 9 called “Beat Them At Their Own Game,” which you can view below:

Mighty No. 9 - Beat Them at Their Own Game Trailer