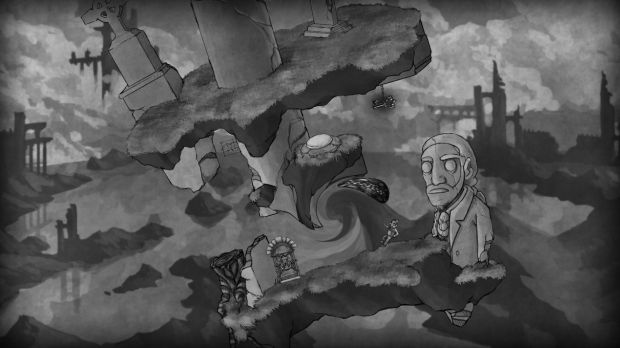 Midnight City, a recently founded publisher, is keeping their property announcements a-going as today they revealed the Xbox Live Arcade version of “The Bridge.” The Bridge was developed by Quantum Astrophysicists Guild, better known as Ty Taylor (programmer and designer) and Mario Castañeda (artist). The game “is a 2D logic puzzle game that forces the player to re-evaluate their preconceptions of physics and perspective through 48 increasingly-difficult levels.” Midnight City had recently announced Slender: The Arrival and Blood of the Werewolf release dates and now you can add The Bridge to that as it will be arriving for XBLA on November 13th.

The Bridge focuses on bringing players into a new gameplay experience, beyond what they may expect from the usual puzzle game. Following in the footsteps of non-traditional titles like Braid and Limbo, The Bridge offers a uniquely cerebral approach to gaming. With detail-oriented, hand-drawn environments that resemble architectural design, more than level design, players are asked to look beyond just the protagonist and into the environment to solve each puzzle. The ability to control the world around the protagonist offers a plethora of options for strategically positioning both the character and the world to achieve success. Critical thinking is a key to player progress and is not limited to just the environment; players will face off with “The Menace,” gravitational vortexes and parallel universes adding twists for additional layers of gameplay in this award-winning title.

I’m not the biggest fan of, you know, thinking. But on the other hand, The Bridge had my interest when the announcement press release said “Limbo.” The Bridge will release for XBLA on November 13th at a price tag of $9.99.