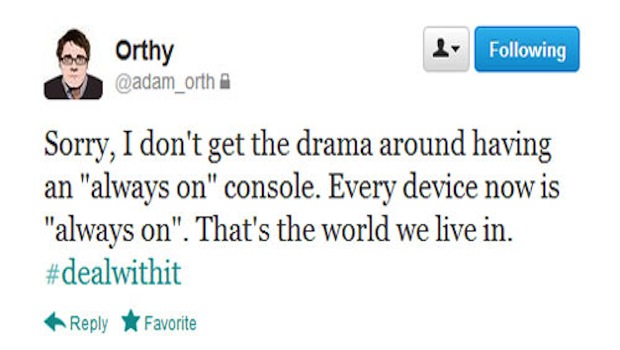 Adam Orth, formerly one of several creative directors at Microsoft, sparked a sizable controversy last week after he posted comments on Twitter regarding the already heated debate regarding “always-on” consoles. Various sources have confirmed that he is no longer with the company, and Microsoft has been experiencing some rather harsh backlash from fans whom Orth told to “deal with” their frustrations at the perceived design flaws of the coming Xbox 720.

It’s another one of those cases where good people succumb to base emotions and fire off ranty little Tweets on everybody’s favorite micro-blogging platform, and one can’t help but wonder – did he think his bosses would never see it? Does he know how social media and viral online publications work? Of course he does, but still – in addition to handling hefty creative responsibilities for Xbox design, marketing, and release, the guy needed to know how to uphold his end of the PR campaign as well, and it comes as no surprise that Microsoft would “deal with him” as harshly as they did. The company expressed their tender remorse through this public mea culpa:

We apologize for the inappropriate comments made by an employee on Twitter yesterday. This person is not a spokesperson for Microsoft, and his personal views do not reflect the customer centric approach we take to our products or how we would communicate directly with our loyal consumers. We are very sorry if this offended anyone, however we have not made any announcements about our product roadmap, and have no further comment on this matter.

In the age-old conflict known as The Console Wars, the Xbox 360 has historically outperformed the PS3 in American sales (although the Sony machine understandably crushes its competitor in Japan), and there are countless opinions alleging that one is better than the other. However, in pure marketing terms, the PR storm that Orthy unleashed causes me to think that few gamers will be surprised when the company finds their sales numbers wilting upon release, with (former) fans more than happy to express a similar “deal with it” mentality as they joyfully trundle home their shiny new Playstation 4’s.