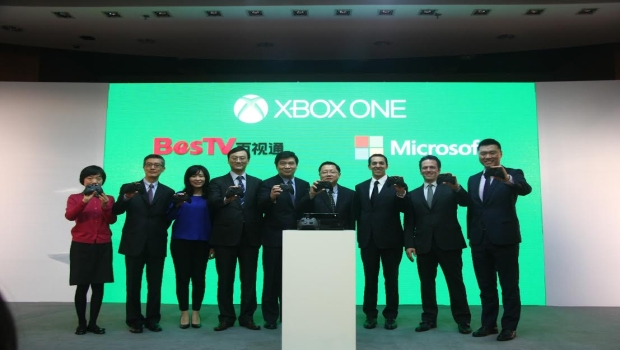 Microsoft took a massive strategic step today.  For the first time since the original Xbox launched in November of 2005, Microsoft will have an Xbox console available in China.  A country with 618 million Internet enabled users (for comparison the United States has roughly 260 million) is an attractive market to capture!  Their new partner, BesTV New Media will help Microsoft get a foothold in Asia that they’ve not really secured until now.  Let’s dig into the announcement:

“Launching Xbox One in China is a significant milestone for us and for the industry, and it’s a step forward in our vision to deliver the best games and entertainment experiences to more fans around the world,” said Yusuf Mehdi, corporate vice president, marketing and strategy, Devices and Studios, Microsoft. “BesTV has a rich history of delivering innovative entertainment content. It is the ideal partner with which to bring the Xbox business to China.”

“The launch of Xbox One here will bring distinction as the first-ever game console with OTT functionality in China,” said Dazhong Zhang, senior vice president, Shanghai Media Group, and chairman, E-Home Entertainment Development Company Ltd. “The launch of Xbox is a milestone for our company in the family entertainment market and will create profit growth opportunities. Furthermore, we will continue our investment and support into research and development for gaming content together with Microsoft. Via our cooperation with the world’s leading team, we will continue to develop video games fused with Chinese culture and provide further distribution support for locally produced Chinese video game content to the world.”

The culture of games and entertainment is rapidly expanding in China, with nearly half a billion people playing games — roughly more than a third of the country’s population and more than the entire population of North America. The gaming industry alone generated more than $13 billion in 2013, a growth of 38 percent over 2012.* While much of that comes from PC, mobile and online gaming, the SFTZ opens the opportunity for Xbox One to bring the next generation of games, entertainment, online education and fitness to a burgeoning market.

“I congratulate BesTV and Microsoft on their joint announcement that the home entertainment system Xbox One will be available in China this September,” said Zhu Yonglei, director of the Shanghai Municipal Press Office. “This is a major achievement for the Shanghai Free Trade Zone, and the collaboration between these two leading brands will bring an unprecedented entertainment experience to consumers in China.”

Enwei Xie will lead Xbox China for Microsoft, bringing years of Microsoft experience both in China and abroad to the endeavor. As general manager of Xbox China, he will also have operation and management responsibility for the joint venture.

“The opportunities are endless for creators to unleash their imaginations for games, online education and fitness experiences for China and beyond,” said Xie. “Creators and gamers alike have eagerly awaited a new generation of entertainment experiences in China, and their wait will be over with the arrival of Xbox One this year.”

As part of the partnership, E-Home Entertainment is investing in an innovation program that will enable creators and developers to build, publish and sell their games on Xbox One in China and in other markets where Xbox is available. Within China, Microsoft will work with traditional retailers to establish a new growth category and partner with BesTV to explore expanded channel opportunities in the telecommunications segment.

This global expansion into new markets later this year continues the most successful launch in Xbox history. More than 5 million Xbox One consoles have been sold-in to retailers in the 13 countries where it’s available today, representing more than 60 percent greater sales than Xbox 360 in the same time period. Building upon this momentum, in September Xbox One will be available in 42 total markets worldwide.

This is an amazing coup for the Redmond-based company.  Congratulations to the team on this landmark partnership!  Look for more details as we approach that September release date.