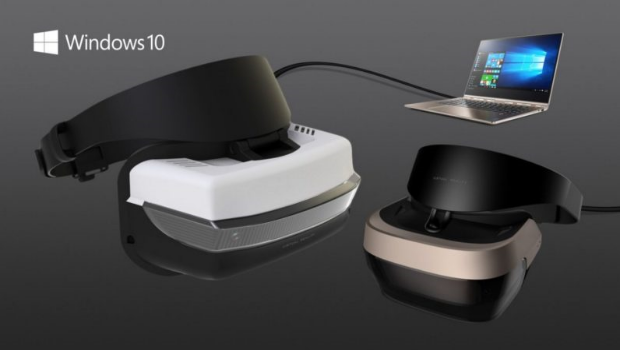 At its Windows 10 event today Microsoft announced a new line of Virtual reality headsets that will be made by its partners at companies such as Dell, Lenova, Asus, HP, and Acer. These headsets are going to come in at a much lower price compared to the current VR headsets on the market, starting at $299.

Microsoft stated that the headsets will be the first and only to use “inside-out six degrees of freedom sensors.” allowing a person to experience VR without requiring any additional items such as cameras or stand alone sensors like the Psvr, Oculus Rift, and the HTC Vive do.

Recently Oculus revealed its Santa Cruz prototype which uses tracking similar to the headsets shown at the Windows 10 event. Unlike the Oculus prototype, the headset shown on Microsoft’s stage today was not wireless having at least one wire connected to it.

Microsoft didn’t release any technical specs for the headsets hardware or their resolutions. No word has been given on whether or not you will be able to use them with an Xbox one. The headsets are schedule to release sometime in 2017.