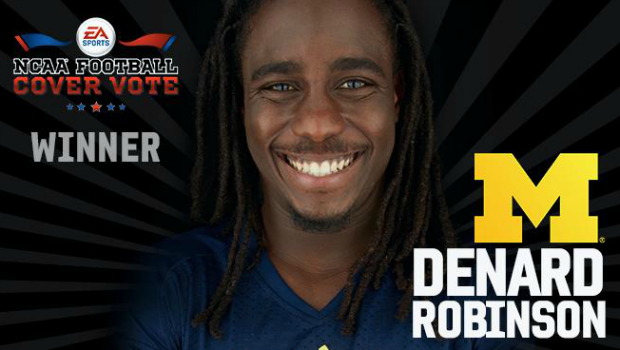 Former Michigan Wolverines quarterback Denard Robinson has been selected as the cover athlete for EA’s NCAA 14. Robinson defeated former Texas A&M wide receiver Ryan Swope in a close race, with Robinson securing over a quarter million votes according to easports.com.

Robinson’s win comes due to his work on rallying his fans on social networks, as well as the help of several former Michigan players, including ESPN personality and former Wolverine Desmond Howard.

“I want to say thank you to all the fans at Michigan for getting behind me,” said Robinson, the NCAA’s all-time leader in rushing yards by a quarterback, to EA Sports. “Michigan has one of the best fan bases.”

Fans should continue checking the NCAA Football Facebook page in the coming weeks for more information on new features, exclusive assets, the announcement of the official release date and more.