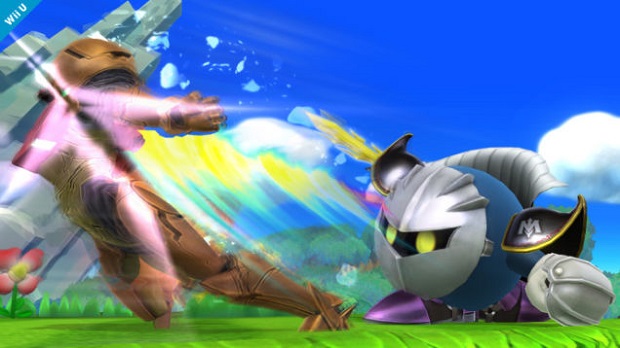 Making his second appearance in the series, Meta Knight has been confirmed as a playable character in Super Smash Bros. for Wii U and 3DS.

News of this comes from the Miiverse where Nintendo’s Masahiro Sakurai confirmed his inclusion as his “Pic of the Day.”

Much to the competitive Smash Bros. community’s delight, Meta Knight has been altered slightly to make him less powerful than he was when he debuted as a fighter in the series in Super Smash Bros. Brawl, having widely been considered the game’s most over-powered character.

“Meta Knight’s Up Special Move, Shuttle Loop, changed quite a bit in this game. The glide is gone, and the attack slashes opponents twice while spinning in a large loop. This has turned into a highly technical and effective move.”

Meta Knight is just the latest in many characters revealed to be joining the next Smash Bros., with Captain Falcon, Robin and Lucina all recently confirmed to be playable last month.

Super Smash Bros. for 3DS is slated for release on October 3rd, with the Wii U version expected sometime later. For more on the next installment on the crossover fighter, check out our preview from this year’s E3.