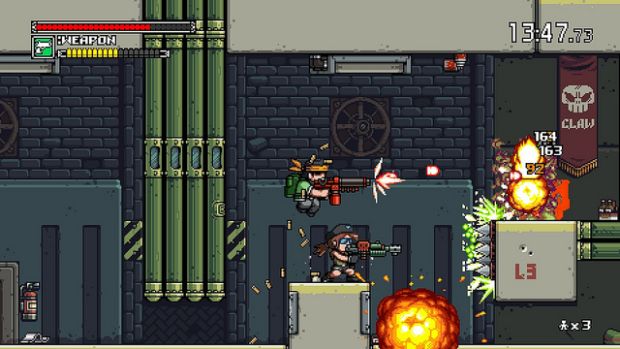 The guys behind the Scott Pilgrim vs. The World game, Tribute Games, will be bringing their run and gun title “Mercenary Kings” to the PS4 this winter. Mercenary Kings features a unique twist on the standard 80’s and 90’s run and gun platform genre. It also has a unique weapon crafting system that holds plenty of opportunities.

What we’re really excited about, though, is the co-op multiplayer in Mercenary Kings. Developing the game knowing it’s heading straight to a powerful, multiplayer platformlike PS4 is, well — pretty amazing! Fueled by great memories of blasting down alien monsters with a friend in oldie classics, we want to recreate that type of fun on a modern console.

Is there better friendship cement than blasting away giant Exo-suited soldiers or evil gods from other dimensions!? There could be, but we can’t think of any.

You have my money, Tribute. I just want games to play! The PS4 releases on November 15th and, again, Mercenary Kings is coming this winter. However, it’s available now on Steam as an Early Access download.