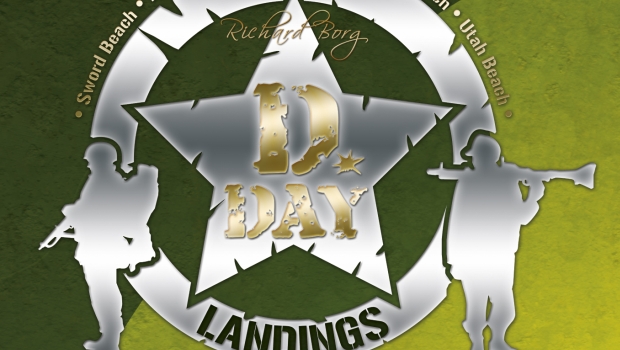 Days of Wonder had two huge hits released ten years ago, Ticket to Ride and Memoir ’44.  While Memoir ’44 has the look of a war game, the simple rules and the ability to play several players at the same time made it endure for the decade.  The expansions and maps have helped to keep the experience fresh.  Now Days of Wonder has announced a huge new map pack coming out in June that will make the hardcore fans happy.

70 years after D-Day, this new expansion commemorates the Normandy landings with six unique Battle Maps. The new Extended Breakthrough format introduced in this expansion is 23 hexes deep and offers battles on a scale and scope never seen before.

The D-Day Landings maps include settings for: American Airborne, Utah Beach, Omaha Beach, Gold Beach, Juno Beach, and Sword Beach. Each battle can be played individually or assembled with its neighboring scenarios for epic Double- and Triple-Map battles. With enough players, you can even link all six Battle Maps together for the Ultimate D-Day Landing Experience, creating a giant board that recreates the entire Normandy coast!

“We’ve had great fun both creating and playing these maps,” said Memoir ‘44 creator, Richard Borg. “Watching a dozen or more players battling over all six maps at once is an epic gaming experience. Not only do these D-Day Landings maps honor the 70 year anniversary of WWII’s most iconic battle, I’m also proud they mark the tenth anniversary of the Memoir ‘44 game system.”

This expansion is not a standalone game and requires at least one original copy of Memoir ’44, as well as the Terrain Pack, Equipment Pack, and Winter Wars expansions. The Mediterranean Theater expansion is also recommended, though not required. More copies of the base game or expansions are required if you want to play a Double, Triple, or Six Map battle.

The D-Day Landings Battle Maps are designed for 2 players, but can be linked together to accommodate up to 12 players. Included are the six pre-printed Battle Maps, a punch board, and multi-lingual English and French rules for the several game modes (Double-, Triple- and Ultimate Six-Map battles), all encased in a cloth-bound Commemorative Briefing Folder. It will be available in better game stores in North America and Europe in June at an expected retail price of $35/€35. For more information visit the website at http://www.memoir44.com/content/d-day

There is a lot of content, but you’ll need a few of the expansions to play it.  However, those this sounds like a dream come true for those who have wanted to play a Normandy scenario using Memoir ’44.  I’m impressed that Days of Wonder has kept this under wraps for so long, but they have had a few great surprises already this year.