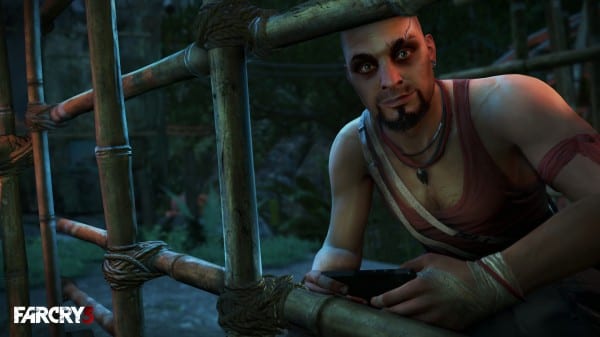 With Far Cry 3 not too far off on the horizon, Ubisoft has today released the first of what will be several character trailers. Trailer one focuses on two of the game’s antagonists, Vaas and Buck.

Deep in the heart of insanity you’ll encounter Vaas and Buck, two of the most twisted and ruthless savages in Far Cry 3.  Learn the rules of the jungle and see how they unleash hell on the unfortunate souls who cross their paths.

Vaas is an unpredictable madman who is just as dangerous to his friends as he is to his enemies. Formerly a fierce tribal warrior, Vaas has become a coked-up enforcer whose favorite pastimes include kidnapping innocents, accepting ransom money, and selling them as slaves. He’s an expert in close combat and a crack shot who wears his battle scars with pride. When the unfortunate player meets Vaas, they get a solemn promise: “If the jungle doesn’t eat you alive, I will.”

Buck is possibly the most depraved and violent man on an island of madness and murder. An Australian soldier-turned-mercenary working for the drug/slave cartels of the south pacific, Buck’s reputation for brutality is rivaled only by his distinctive taste for torture. His weapon of choice is an oversized Bowie knife, and if that doesn’t create the appropriate imagery for you, then let me put it his way: “Around here, we eat what we kill.”