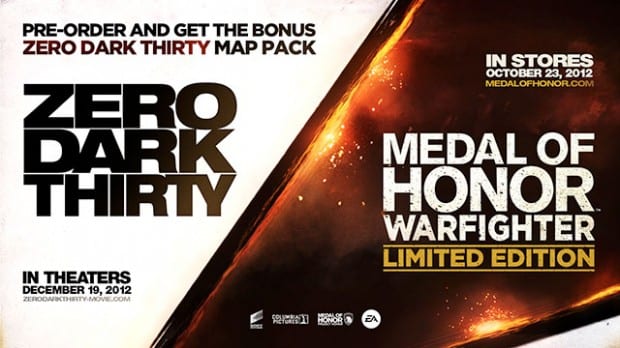 We always referred to it as “Oh-dark-thirty” instead of Zero, but I digress.  Medal of Honor Warfighter is giving us a brief look at an upcoming Map Pack entitled Zero Dark Thirty.   This map pack is one that goes over what has become a very well-known place in the Middle-East – Chitral.

The Zero Dark Thirty Map Pack is inspired by a decade-long manhunt in some of the world’s most dangerous places: Darra Gun Market and Chitral Compound. Darra is home to dozens of back-alley shops and self-taught machinists making guns by hand. Chitral is highly inaccessible and was thought to be one of Bin Laden’s hideouts – only those with the capabilities of total surprise will successfully penetrate the compound.

Medal of Honor Warfighter is launching this coming Tuesday, October 23rd on Xbox 360, PS3, and PC.   This pack will be included with the pre-purchase of the game, and it does look quite good.

The window on this title will be unfortunately short (I will receive it on release day), but I will do my level best to get a comprehensive review together as quickly as possible.  Stay tuned….