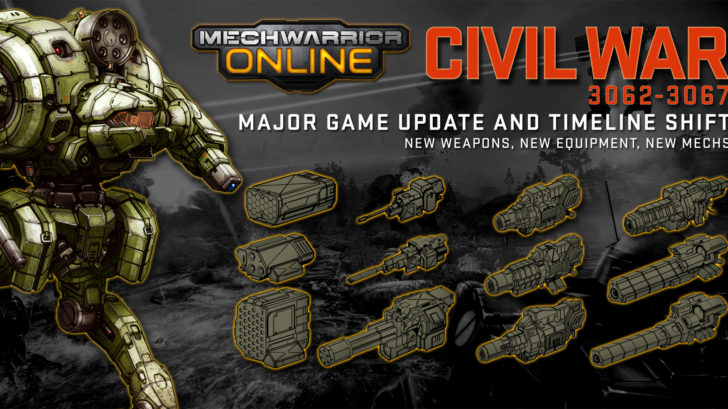 MechWarrior Online is taking a massive lumbering mech-sized step forward today with their Civil War update. The online giant stompy-mech F2P title will now embrace the period between the 3062 and 3067. This timeline expansion means brand new weapons, new mechs, new equipment, and a far narrower gap between the filthy Clanners and the tech of the Inner Sphere. It also means that some of that same tech has diverged, granting unique advantages (and disadvantages) to each side. What can MechWarriors expect the next time they hit the bay? Here’s a small slice from a much larger list:

For you fellow book-dorks like myself, there’s a little fiction to go along with your shiny new gear:

Nine hundred and thirty-three bright sparks of vibrant prosperity spread across a thousand light years. A crown of jewels worthy of a Successor State to the golden age of the Star League. What is more, while the barbarians from beyond the Periphery battered us, they heralded a technological renaissance that has swept the Inner Sphere. Even now each Great House is arming their bright-eyed women and men with the latest tools to hoist their standards high. Alternate particle projector cannons from the Draconis Combine; a new Gauss from the Free Worlds League; a slew of technologies from my beloved Federated Commonwealth, from new fusion engines to targeting systems to rotary autocannons; even the Capellan Confederation and the barbaric Clans have new offerings!

And of course, the knight avatars of the last half-millennium still stalk enemies across remote star systems, with new BattleMechs walking off assembly lines. I was honored to witness the preliminary field trials for a new and deadly BattleMech from Defiance Industries: the Uziel. Other manufacturing conglomerates also continue to build new suits for the MechWarrior-knights across the Inner Sphere. Truly the light of another golden age dawns!

Yet folly! Hubris! Despite such overabundance of new weaponry and technologies we might use to safeguard—and yes, even expand—our borders, what have we done? Fallen to bitter rivalry and bickering, yet again! A realm of bounty that can only lead back to a true Star League beckons us all, and yet our eyes can only behold the affronts of our brethren. Though I risk certain incarceration, I care not which sibling ultimately holds the throne. I care only that they re-unite the only bastion of hope in our war-torn galaxy. The Federated Commonwealth must stand!

The new pack and associated mechs are available immediately, with the Uziel, Annihilator, Cougar, and Mad Cat MKII ready to go. All mechs will, later this year and into early next, become available for purchase with MC or C-Bills.

If you’ve dropped off the radar for MechWarrior Online, now might be a fantastic time to climb back into the cockpit and try out some of the newest behemoths and their associated death-dealing firepower.