Executive Producer Casey Hudson and Lead Combat Designer Cory Gasper kick off our demo this afternoon in a closed-door meeting.  Casey begins by explaining that Mass Effect 3 of the Mass Effect experience – everything we’ve seen thus far builds towards this.  Shepard has sacrificed so much, and this hard-hitting immersible experience presented in as big a way as it can possibly be told.  The warnings of an impending invasion has gone unheeded, and Commander Shepard has been recalled to Earth to stand trial before the Counsel for the actions committed in his or her time with Cerberus. Your situation is postponed in the most unfortunate but well-predicted way possible – the Reapers have arrived and are assaulting the Earth directly.  It is once again up to Commander Shepard to rally the force of the galaxy, form a battle plan, and Save not only the Earth, but all sentient beings. With the cumulative effects of both previous games coming to a head in this title, Mass Effect will close the trilogy in true Bioware fashion.

Our first demo was a demonstration of how combat has changed.   We saw this part of the demo in the EA presentation.  Commander Shepard is trying to destroy a Reaper base with the help of the Normandy and some starships positioned overhead as support.  Opening the blast shield for the base, we call in fire support from the Normandy using a laser to designate our target.  The resultant explosion knocks us down onto the lower level as Cerberus agents close in on our position.  A giant and very much alive Reaper crawls out of the hole and looms large over our tiny frame.  Legion advises that he’s secured transport, and we hop aboard the vehicle.  Liara and Garrus enter the vehicle, giving us our full team to escape.   Using the mounted turret we repeatedly but ineffectively pelt the four legged Reaper in various locations. Realizing that our turret won’t be nearly enough to stop this creature, we call for an orbital strike. With a flash the blast impacts the creature, dropping it to the ground. This is a Reaper, however – it gets back up nearly as quick as it dropped and bears down on us as the first demonstration ends.

The second demonstration is part of the missions that have Shepard trying to unite the galaxy against the common threat.  In this mission, we are trying to rescue a person who holds the key to an (uneasy) alliance between two civilizations.  Specifically, there is a fertile female Krogan, and Mordin is working to help free her.  Garrus, Liara, and Shepard are working to free her to try to repopulate the Krogan race.  Unfortunately, Cerberus has different ideas, and they are issuing assault orders against the team and their valuable passenger. This allows us to see the all new cover mechanic.

The new cover system isn’t a revolutionary change, but it will clearly have an effect.  There is a blue arrow that points in the direction you are going to move should you chose to dodge or roll.  The arrow will bend forward and backward to indicate a combat dive to another piece of cover in either direction.  As we move from cover to cover, pulling an enemy over a short wall and executing him on the ground with the new Biotic Omni Blade.  To counter the cover system, enemies have gotten smarter.  They take cover, dodge, and use cover in a more effective way, not running between cover in the open.  To help make your team smarter, you can now issue very specific orders to your team, setting positions and battle plans.  As we place our team, an enemy with a shield advances on us – his shield making him invulnerable from the front.  Tactically flanking the team, we flank the Guardian, using biotics to slow him down enough to be taken from the rear and side.

Since Casey Hudson was the Producer of Knights of the Old Republic, I wasn’t surprised to see that Mass Effect 3 now features a workbench.  Allowing you to add mods to your gun on the fly, changing the look and effect of your weapons, you can now perfectly balance your gun to meet the objectives in front of you. This is similar to the way that you’ll be upgrading your skills as well.  Shepard is already powerful and you won’t be starting over from scratch this time – instead you’ll add to your already impressive arsenal.  There are now both passive and active skills like combat mastery.  These break down into subgroups including Influence and Dilation, Influence and Damage, Henchman Damage, Recharge Speed, Influence and Duration, Headshots, and Weapon Master.  These have a larger effect than just adding a function or skill – we’ll have to see how it plays out across the entire team.

In what was referred to as a “Decision Point” we have to authorize the release of the fertile female Krogan. Unfortunately as we go to do this, a Cerberus Mecha easily five times our size airdrops in. This Cerberus Atlas represents a serious threat, but if we can take it down we can then take control of it and use it against our enemies.  It also represented the end of this portion of the demo.

In Mass Effect, you’ll be charged with visiting distant worlds to retrieve war assets, liberating facilities, and executing a plan to take down the reapers.  The entire galaxy is at war and every victory is an asset that can be turned against our Reaper enemies.

The final portion of our demo is pulled from earlier in the game, and was only shown behind closed doors.  With Shepard detained for his actions and being held for a hearing in front of the Counsel, the Reaper threat arrives and Admiral Anderson is doing his best to help us escape before its too late.  As we get to the roof we see the first of thousands of Reapers touch down on the planet. The large and beautiful skyscrapers of the Earth are dwarfed by the massive Reapers. As we watch in horror, husks ascend onto the rooftop. Jumping down into the damaged building we see a small child hiding in a nearby vent.  We want to try to help him but his insistence is that we cannot help him.  Admiral Anderson is insistent that we leave, but the child simply won’t come out – we’ll have to leave him.

Back out side on the roof, Reaper ships are cutting through orbiting Starships, causing explosions so massive as to shake and destroy the cityscape. A new creature called a “Cannibal that looks like a Krogan husk swims up from the water as we crawl through debris to try to reach the port to board the Normandy.

Admiral Anderson finds a radio and activates a distress beacon to try to reach the Normandy.  We signal for a pickup but the radio is cut short forcing us to hold our position not knowing if our message was heard.  Right as our ammo counter hits zero, the Normandy drops fire on the Cannibals, letting both of us board her to safety.  Stubbornly, Anderson refuses to board the ship insisting that we head out to try to unite the galaxy to defeat the Reapers. Throwing us our dog tags, he reinstates us as Commander.  Wishing him good luck we leave with the promise to come back with every bit of support we can muster.   NS dropships begin rescue operations, including the small child we tried to rescue earlier just as a massive reaper bears down on them.   As the ship with the child onboard flies away it is cut down and explodes in air – that child, and a great many like him, have suffered the ultimate fate against an impossible enemy. We have lost. As fire rains from the sky across the planet, the Normandy breaks orbit – now more than ever, the fate of the Galaxy rests in our hands. 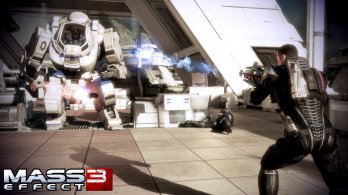 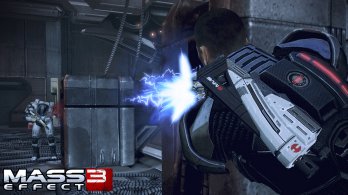 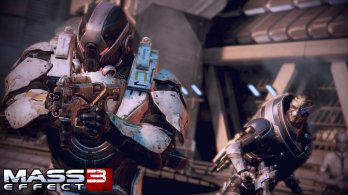 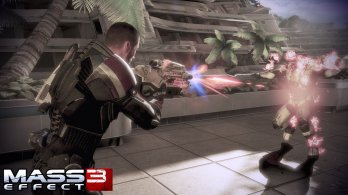 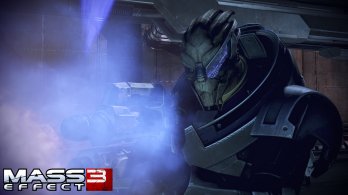 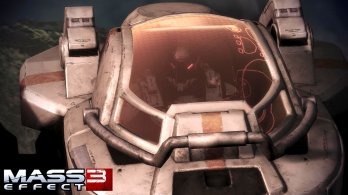 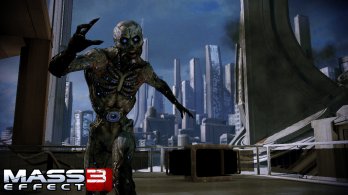 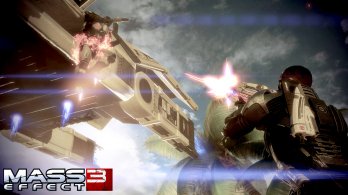 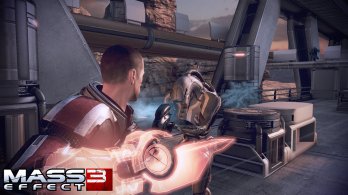