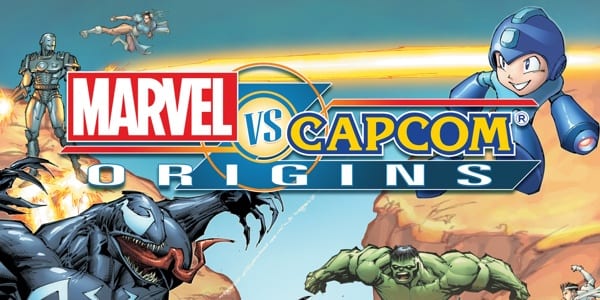 Marvel vs. Capcom is a compilation of two of the biggest games of the 90’s available on the xbox live arcade and PS3.

MARVEL VS. CAPCOM ORIGINS is a compilation of two of the most popular arcade games of the ‘90s – Marvel Super Heroes and Marvel vs. Capcom: Clash of Super Heroes. These two classic games are kept arcade-perfect, while adding a host of features sure to tap into arcade nostalgia while meeting today’s online needs.  MARVEL VS. CAPCOM ORIGINS is jam-packed with Marvel and Capcom fan-favorite characters and crazy, beloved gameplay that throws a powerful punch.

MARVEL VS. CAPCOM ORIGINS offers both the one-on-one gameplay of Marvel Super Heroes with its unique Infinity Gem system and the two-on-two carnage of the original Marvel vs. Capcom: Clash of Super Heroes, featuring a tag system, assists, and the wild Duo Team Attack. Bringing forth a host of features never before seen in these games, MARVEL VS. CAPCOM ORIGINS adds GGPO-enhanced online play with 8-player lobbies and spectator mode, HD graphical upgrades, dynamic challenges and replay saving.

The release date is September 25th for $14.99 on the play station network and September 26th on the Xbox live arcade for 1200 Microsoft points.

In addition, there is a dozen of new screenshots to satisfy your needs.