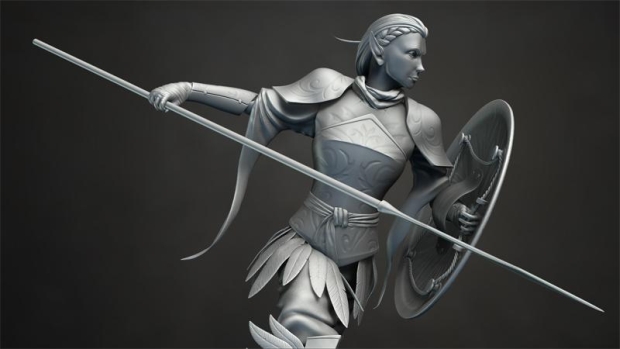 Board games are no stranger to the PC.  You can find old versions of Monopoly, Stratego, Risk, and others easily.  War games that used hexes had their history in board games.  However, we haven’t seen many simulation of miniature games.  That’s about to change with Mark of War, who just landed on Kickstarter.

Warpforged Games is excited to announce the Kickstarter for Mark of War, a virtual tabletop battle game that allows you to collect and command an army to battle for control of a war-ravaged world. Combining all of the hobby appeal of tabletop miniatures gaming with the versatility and interaction of video gaming, Mark of War puts you in control of every aspect of your army, from the overall strategy to the look of your fighters to the dice rolls that determine their fate!

A team with decades of video game development experience and a lifelong passion for miniatures, Warpforged Games are proud to finally bring the tabletop gaming experience to your PC or Mac. Inspired by hugely successful tabletop games such as Warhammer, Warpforged have joined forces with best-selling writer and former Games Workshop designer Gav Thorpe to create the world of Mark of War, bringing to life a land ripe for conquest and battle – your conquest, your battles.

Live now the Mark of War Kickstarter will allow fans of tabletop games and turn-based strategy games not only to make this project a reality, but to get in from the start to help develop and steer this groundbreaking game. Check out the amazing rewards and add-ons, including fantastic limited edition miniatures and the opportunity to be involved in the game development process.

I really like how they show the table top view on the Kickstarter page.  It also sound like you can customize the figures.  Each piece has a base as well, trying to make these pieces like actual miniature figures and not something realistic.  They have an ambitious goal, but if you enjoyed miniature game, or wanted to but didn’t have the time to paint all your figures, this might be a Kickstarter to look into.