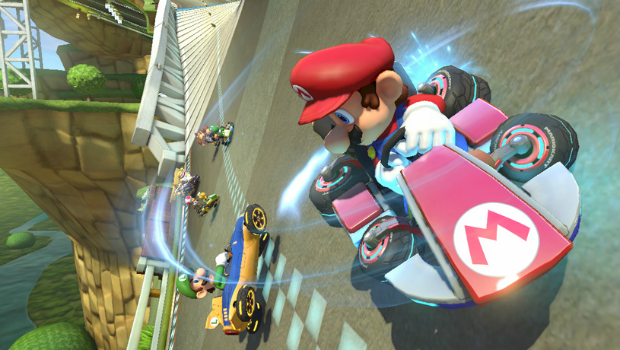 A video has been released on Nintendo’s website, revealing many juicy details about the upcoming Mario Kart 8 on the Wii U system.  The video shows off some of the new characters and items within the popular comic racing game, as well as more details on the promise of “anti-gravity” racing within the game.  In addition, a Mario Kart 8 Wii U bundle and free download offer were detailed.

“Everyone loves Mario Kart,” said Scott Moffitt, Nintendo of America’s executive vice president of Sales & Marketing. “It’s a franchise that brings people together for fun at a family gathering, a frenzied race against friends or just an afternoon break at the office. The numerous new features of Mario Kart 8 make this the most ambitious version yet, and one that will have players of all skill levels racing for the checkered flag.”

The video leads with the anti-gravity functions in the races, and it is certainly a spectacle to see.  Small strips, akin to turbo boosting strips in other races, turn your vehicle into an anti-gravity machine that allows you to use any surface as a racing surface.  Once activated, you can race on walls, ceilings, straight up a 90 degree angle, and more.  Wherever there is a reachable surface, your vehicle can race on it in Mario Kart 8.  The developers have done a nice job of incorporating the idea into the track designs, as well.  The use of waterfalls, tall buildings, and other physical entities on a racetrack that were once static background as racing surfaces is impressive to see.

The video also shows off some new items, like a super horn and a piranha plant, that have interesting new abilities for destroying other racers.  Two new characters are being added as well.  Pink Gold Peach is a counter-part to Metal Mario, and Baby Rosalina joins in on the racing as well (though perhaps Adult Rosalina needs to rethink allowing an infant to race.)  Many other announcements are made in the 30-minute plus video, including online multiplayer capabilities, a race replay theater, and a offer to receive one of four Nintendo games free with the purchase and registration of the game before July 31.  Finally, the Mario Kart 8 Wii U bundle will be available for purchase for those who may pick up a Wii U system for the sake of that sweet, sweet, manic kart racing.

Mario Kart 8 will be available on the Wii U system May 30.  For more information about Mario Kart 8, visit http://mariokart8.nintendo.com or keep your eyes on this space.