Ubisoft and Nintendo are teaming up to bring Mario and Luigi to their much-anticipated platformer/music title, Rayman Legends.    Exclusive to the Wii U version (are you surprised?), players will be able to unlock skins for Rayman as Mario and Globox as Luigi simply by playing the game for 20 minutes.   In case you’ve missed out on our previous coverage, check out this little bit on the game before you check out the new screenshots and video:

Following Rayman Origins, our heroes take a 100-year nap, allowing nightmares to infest the Glade of Dreams. Once Rayman awakes from this mysterious sleep, he must set off on a new adventure with his friends to restore order in the universe. While traveling between five different worlds, players must defeat legendary enemies to save the Teensies from these evil villains. Rayman Legends features a wide range of gameplay, including traditional Rayman platforming action and new music rhythm-based stages. In Rayman Legends, a fifth player can join in on the fun by taking on the role of Murfy exclusively on the Wii U GamePad controller. All of the game’s adventures can be played by up to five players on Wii U.

This is one of those games that you just can’t help but smile while you play it.  The music, the art direction, and the gameplay are unique and entirely too much fun.

Rayman Legends will be released in North America on September 3rd, 2013, for Wii U, Xbox 360, PlayStation3, Vita, and PC. 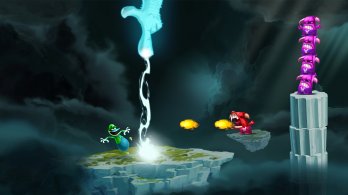