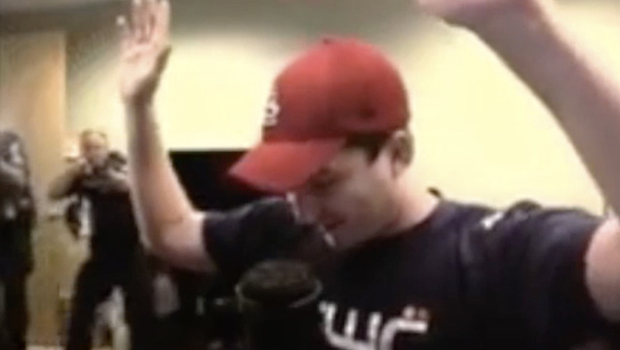 What would you do if you were sitting back enjoying some online gaming with your friends when all of a sudden a real life Swat Team armed with automatic weapons burst into your room? That’s exactly what happened this past Wednesday to Jordan Mathewson, a 23-year-old living in Littleton Colorado, who was in his office playing Counter-Strike at the time of his arrest.

In the video you can hear Mathewson tell the swat team members that they are being streamed live, just before one of the officers removes the camera. In a later interview with Denver’s 7News, Mathewson confirmed that over 3000 people were tuned to the stream during the time of the unexpected visit. The Littleton Police Department has not yet been able to confirm who was responsible for the dispatch; only that someone using a landline reported an active shooter at Mathewson’s location.

Right now the incident is being chalked up as the latest in a growing trend of pranks known as “Swatting,” where someone anonymously files a false report in order to dispatch the police. In a press statement, the Littleton Police said, “The caller claimed to have shot two co-workers, held others hostage, and threatened to shoot them. He stated that if the officers entered he would shoot them as well,”

You can click to watch the video below and let us know what you think in the comments. Be safe.