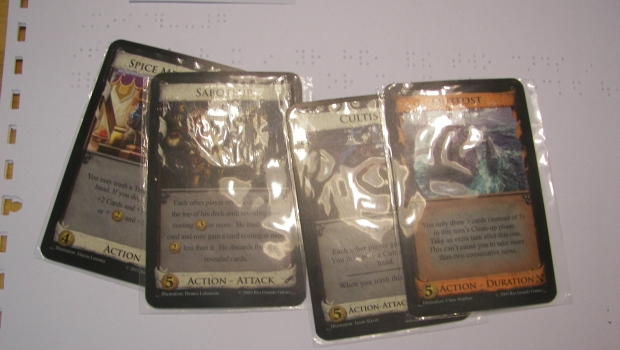 A lot of us take our sight for granted.  I never realized how much so until I met someone in college who was completely blind and played trombone using Braille.  It’s nearly impossible for the blind to enjoy video games due to the nature of the medium.  However, some board games could be accessible with a few tweaks.  A new Kickstarter has gone up to help create accessories for popular board games with this in mind.

There are so many great board games released every year that, for most people, the choice is almost limitless. Unfortunately that is not the case for everyone. People with visual impairments have little to no options when it comes to being part of the board game hobby. 64 Oz Games want to change this by making board games accessible to the blind.

“My wife and I both work with and have many friends who are visually impaired. We are passionate about board games and want to make this brilliant hobby accessible to more people. If our campaign is successful we will start producing a new line of products that would add accessibility to existing board and card games. These accessibility kits would be add-ons to games that would allow both blind and sighted players to play together. ” – Richard Gibbs, 64 Oz Games

It is no surprise that this campaign has already gathered the support of over twenty game publishers and the list is growing all the time. Official supporters of the campaign include: Plaid Hat Games, Portal Games, Rio Grande Games, Crash Games, Eagle Games – Gryphon Games, Game Salute & Gamelyn Games.

“We are not just asking people to back our campaign because it is a good cause, we are offering backer rewards suitable for both blind and sighted players. Our game Yoink! Is a tactile micro-game that everyone can enjoy.” – Emily Gibbs, 64 Oz Games

Some well know board game reviewers have also thrown their weight behind this campaign to make board games accessible to the blind:

“Everybody should get involved with this, absolutely amazing!” – Richard Ham of Rahdo Runs Through

The 64 Oz Games Kickstarter campaign is currently live and finishes on Thursday April 24 at 3pm, so if you would like to back the campaign or want to know more, go here: https://www.kickstarter.com/projects/64ouncegames/board-games-now-blind-accessible

Gaming has given me a lot of happiness over the years.  Take a look at this project and help to bring that same joy to others that might not have been able to experience it otherwise.