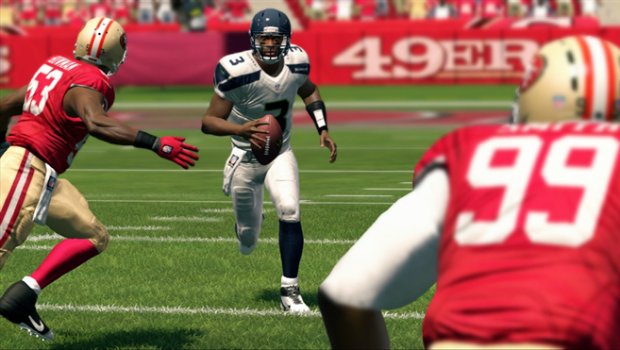 EA released a video, showcasing the next generation version of their Madden NFL 25 video game.  Along with providing a glimpse at the game’s graphical enhancements, the video introduces three new game dynamics that will improve the action on the field.

The first of these new additions, Player Sense, allows players on the field to scan their surroundings and react better to situations in front of them.  If a linebacker meets a clogged line, he will be able to sense the action in front of him and find ways around it, rather than just jamming up against the player’s back.  This will be particularly helpful in blocking schemes, where blockers can now sense the action around them and not bunch together or miss their blocking lanes for no viable reason.

Combined with player sense, the fights in the trenches between offensive and defensive linemen will be more active in the next generation due to War in the Trenches.  The War in the Trenches feature brings hundreds of new animations to the battles between linemen, and promises to have the line work more as a team than a singular unit.

Lastly, the new True Step feature changes the way the feet and legs are controlled and animated on the field.  Speed, angle, acceleration, and amount of open space will all factor into how fast the player’s legs are moving and where their feet land on the turf.  Rather than depending on set animations, football moves with the True Step feature will allow for more control of how a move is implemented, and at the very least should provide some excellent looking broken tackles.