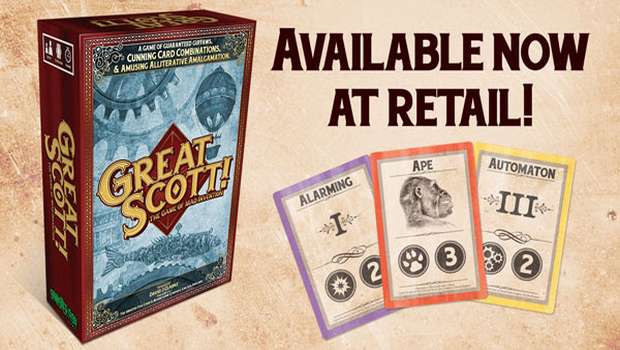 Ever think you had a great idea but couldn’t quite put it to paper or think how you’d implement it?  Then you might be an inventor at heart.  Want to see the craziest creations you can come up with, then you might want to look at Great Scott!

With 180 cards featuring clean, clear graphic design, and 60 period illustrations from the British Library Collection, Great Scott! looks as good as it plays.

The game currently has a very respectable 7.4 rating on BoardGameGeek, and is proving a hit with players.

Queen Victoria has summoned inventors from all over the Empire to compete in a grand contest to decide who will earn the title of Royal Inventor.

Players take on the roles of slightly unhinged inventors and construct ridiculous contraptions using Asset and Concept cards in various categories: Animal, Mineral, Vegetable, and Productive, Destructive, and Transportive. After 5 rounds of drafting, each player presents their invention to the other players, who must award secret commendation points to their favourites.

The presentation phase is the heart of the game, with each player describing one of almost a billion bizarre and hilarious inventions, such as the “Amazing Ape Activated Cucumber Conserver”, or the “Colossal Crab Conducted Cabbage Conveyor”.

Inventions are scored for their base value plus bonuses for combining the various card types. In an innovative twist, bonus points are also awarded for alliteration, making inventions such as the “Diabolical Dynamite Deployed Donkey Deterrent” an extremely high scoring creation! The winner is the player with the most points after 3 rounds.

We could definitely use some drafting games that are easier to teach non-gamers and don’t take an entire dinner table to lay out.  You can find out more about Great Scott! – The Game of Mad Invention at the Sinister Fish website.