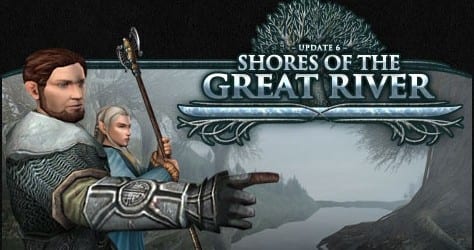 The long awaited way to Rohan is open and with it comes the newest addition to the game’s free Epic Story. Lord of the Ring Online remains a free-to-play MMORPG with the latest updates and progression of the main quest-line. At the same time, it offers new and interesting incentives for players to upgrade to VIP status, such as the Great River Quest Pack in this upgrade.

Travel along the shores of the mighty Anduin in the expansive new region coming in Update 6!  The signs of war are all around you as Isengard and Barad-dûr put their dark plans into motion. Push back the Easterlings, dangerous brigands and an ancient enemy of Rohan, as they gather for an attack on Rohan and Lórien. Explore seven new areas along the upper Anduin including the green plains of Parth Celebrant where treacherous shades roam, unable to rest.

With the quests and areas, the developers have also inserted a couple new play options into the game. Soldier on Landscape allows you to summon you skirmish companion into the game by buying or bartering for a new resource called Soldier Time. You can also customize them to your current situations by fighting skirmishes for ‘skirmish points’ and spending them at Skirmish Trainers throughout your travels.

The Instance Finder has been updated as well on the instance of the community and now offers more options for players. Not quite yet available, but soon, players will be able to select specific instances and quests that they wish to participate in as well as additional rewards in certain situations.

Lastly, look for new items in the store such as Landscape Soldier Tokens, for the aforementioned Soldier Time, a Premium Wallet Upgrade, and Virtue Upgrades, as ranks 13 and 14 are now available.