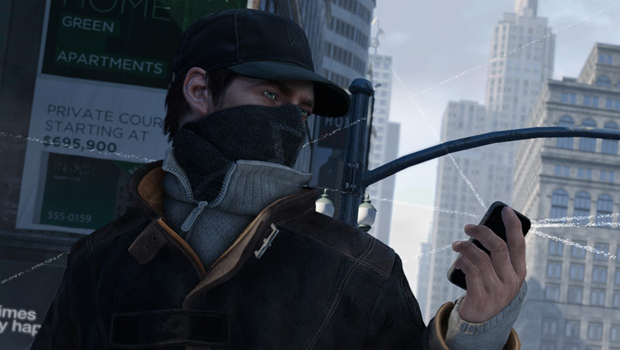 If you’ve been suitably drawn in by glimpses of the Watch Dogs world but are hoping for a more cerebral and text-heavy affair than the game is likely to offer, then good news – Ubisoft has announced that the Watch Dogs experience shall also come in eBook form, courtesy of author John Shirley. Called “Dark Clouds”, it apparently will be a continuation of where the game’s story comes to an end, promising a mix of high-tech adventure with characters introduced in the Watch Dogs game itself. It will also come in two formats – a standard eBook, and an upgraded edition with “ interactive elements including videos and image”.

Need more? Well, that’s what press releases are for, ladies and gentlemen. Here’s the appropriate slice:

Today, Ubisoft announced the ebook Watch_Dogs  //n/Dark Clouds, inspired by the highly anticipated video game Watch Dogs. Authored by John Shirley, the ebook storyline picks up where the Watch Dogs video game leaves off allowing fans to further explore the world of Watch Dogs. The ebook is a first for Ubisoft, as it was conceived in-house and will be released exclusively via digital channels.

John Shirley, prolific author of over 30 books and short stories such as “A song called Youth”, is a known figure in the hacker community and is a pioneer of the cyberpunk movement, and therefore is a natural fit to author the Watch Dogs’ ebook. Having unprecedented access to our Montreal studio dev team and writers, he has recreated the atmosphere of Watch Dogs, into his thriller, that combines high-tech crimes with new and known characters.

“Working on Watch Dogs was enormously interesting to me because its world offers the convergence of cyberpunk and the edgy tech reality of our times; it all plays out with action and energy against the inner city backdrop that I thrive in” said John Shirley. “With hack tech in one hand and gun in the other, Aiden Pearce is a believable fusion of hacker and action hero who deliberately slips between the cracks of society to relentlessly pursue his agenda. The novel introduces Mick Wolfe, an ex-military, who get caught in a dangerous game in Chicago’s hyper connected and violent underground. Working with Thomas Geffroyd and Kevin Shortt at Ubisoft to develop the book was a rocking experience – Ubisoft is right out there on the frontier of videogame development. I couldn’t ask for more inspiration”.

Watch_Dogs //n/Dark Clouds will be available in English, French, Italian, German and Spanish at the game’s release on May 27, 2014. It will be available in two digital formats: an upgraded e-book version with interactive elements including videos and image and a classic e-book. For more information, click here www.watchdogs.com/ebook.

Be sure to check out the links for more details if you’re suitably hyped for the much-anticipated Watch Dogs world – and at this point, who isn’t?