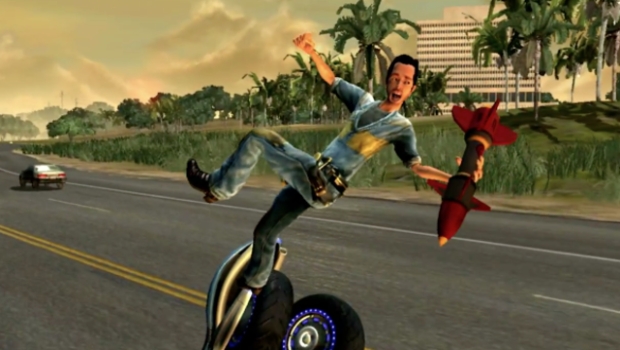 The Xbox One has officially hit stores, and Twisted Pixel couldn’t be more happy about that.  This is their chance to unleash their hilarious-looking title LocoCycle on the world.  The game clocks in at just $19.99, and we will be working on a review for it shortly.  Here’s a nibble if you missed our live-action video post:

Newly self-aware, I.R.I.S. the assassin motorcycle has begun a cross-continent escape to freedom. I.R.I.S.’s only ally is her engineer Pablo, who gets conscripted into the quest after his pant leg gets caught in her chassis. Hunted by the psychopathic motorcycle S.P.I.K.E. and a multinational weapons cartel, they face long odds, but they are riding for ‘Murica and freedom – so how can they lose?

Twisted Pixel is the same team that brought us The Maw, Splosion Man, Ms. Splosion Man, and the Gunstringer.   Look for our coverage very soon.