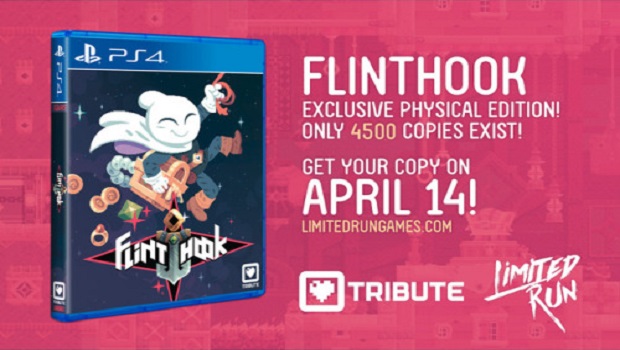 Tribute Games announced on the their blog today that the PlayStation 4 version of their upcoming game Flinthook will be published by Limited Run Games on April 14. As with all Limited Run Games releases, the title will be in a limited production run of 4,500 copies and will be available on the company’s website on that day.

In Flinthook, Players take control of the titular hero, the galaxy’s smallest but toughest pirate as he uses his hookshot to steal treasure and save the world. Players will be able to shoot in a 360 degree angle using Flinthook’s Blasma Pistol. In addition to these tools, Flinthook can utilize a rechargeable slow motion power, which can help with aiming or positioning stunts.

Flinthook will be available on April 14 physically on PS4 exclusively on Limited Run Games and April 18 digitally on PC, PS4, and Xbox One. Check out our interview with Limited Run games co-founder Douglas Bogart here, and stay tuned for more news on Gaming Trend.