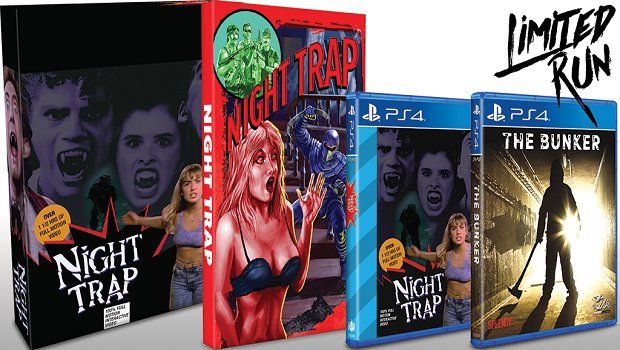 Limited Run Games has announced that it will release physical copies of Night Trap: 25th Anniversary Edition and The Bunker during its self-proclaimed “FMV Friday”. While both games offered will be available on PS4, Night Trap: 25th Anniversary Edition will come in standard and collector’s editions, as well as a PC boxed edition. The games will be available in limited quantities this Friday at 10 AM and 6 PM.

A controversial title back in its heyday, Night Trap: 25th Anniversary Edition puts players in the role of a special agent who needs to watch over teenage girls in a house wrought with danger. Players will have to keep watch through cameras in order to catch Augers, vampires who want to capture the girls for their blood.

The Bunker, on the other hand, is a completely live action experience with zero computer generated effects, filmed on location in a decommissioned government nuclear bunker with a plot crafted by writers and designers behind titles like The Witcher, SOMA and Broken Sword, and incredible cast including Adam Brown (The Hobbit) and Sarah Greene (Penny Dreadful, Assassin’s Creed 3). The game will have a print run of 3,700 copies.

Both games will be available on August 11, with two batches appearing at 10 AM and 6 PM, respectively. Stay tuned for more news here on Gaming Trend.