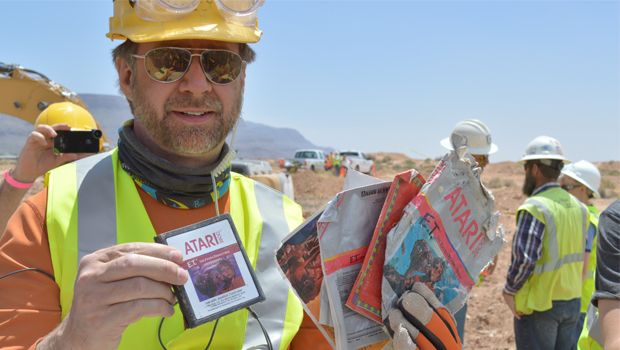 Ever heard the old legend of the E.T. game grave? Long story short: in 1982, Atari made the worst videogame of all time based on the movie E.T. the Extra-Terrestrial. The game was such a complete failure that Atari, rather than paying for storage costs, chose to bury up to a million of its unsold copies in a New Mexico landfill, never to see the light of day again. It’s one of the oldest urban legends in videogaming, and this past weekend it was proven to be true! On early Saturday morning, the resting place of Atari’s greatest shame was finally unearthed.

The group responsible for locating the lost legend of E.T.’s grave is a documentary film crew helmed by notable screenwriter Zak Penn (Avengers, X-Men: The Last Stand, The Incredible Hulk). The excavation, which took place on Saturday, will be the centerpiece to a documentary Penn plans to release later this year as an exclusive for Microsoft’s Xbox game systems.

The news may come as a surprise to previous skeptics of the E.T. grave legend, including the game’s original creator, Howard Scott Warshaw, who publicly expressed his own doubts that such a gravesite ever existed. As workers continue unearthing copies of the infamous game, it would seem that this decades old legend can finally be laid to rest.