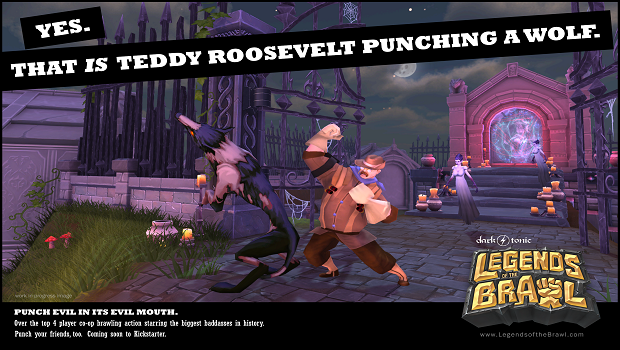 Independent studio Dark Tonic released its Kickstarter campaign for Legends of the Brawl, the studio’s next project slated for release in 2018. The four player co-op brawler is planned for release on PC, Xbox One, and PlayStation 4.

Described by the developers as “Super Mario 3D World meets Heroes of the Storm,” Legends of the Brawl has players fight the devious Rasputin and his nightmarish creatures as one of many 20th century legends, such as Teddy Roosevelt, Nikola Tesla, Lizzie Borden, and HP Lovecraft. The game will feature cooperative play with up to four players, as well as a mashup of “Cthulu, gothic, and steampunk” styles.

Legends of the Brawl’s Kickstarter is currently active and offers an early bird copy of the game for $9 for the first 48 hours of the campaign. Legends of the Brawl is slated for release in 2018 for the PC, Xbox One, and PlayStation 4.