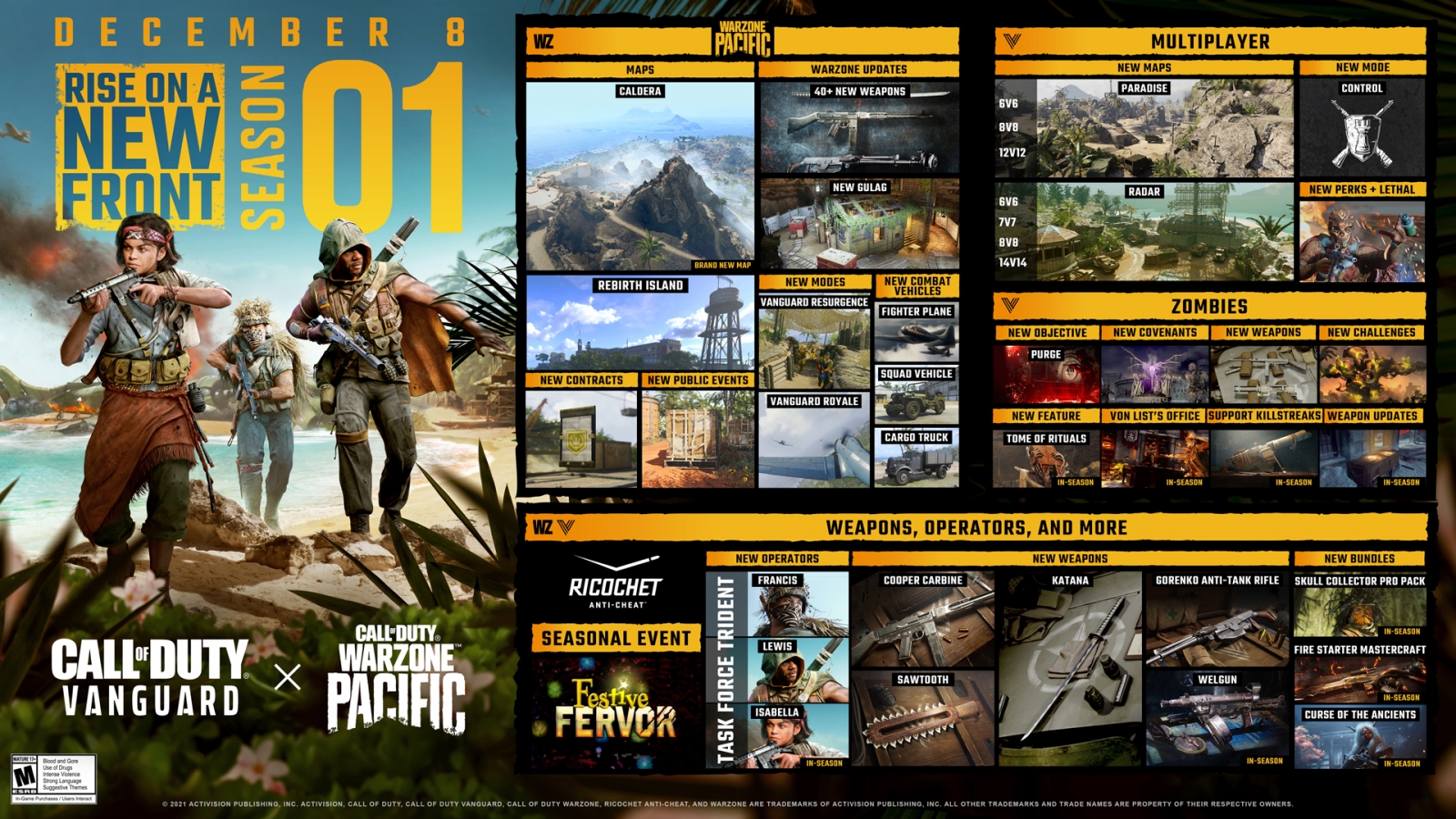 The latest blog on callofduty.com details everything players need to know about season one of Call of Duty: Vanguard, including the new Battle Pass, new weapons, Operators, maps, and more. All Vanguard owners will receive 24 hours of exclusive access to the new Caldera map. You can read below for some of the details, but be sure to check out the blog post for the complete breakdown and a ton of pictures:

“I knew one thing for certain: the world would never be ready for what I found.” — Captain Butcher, Call of Duty: Vanguard

Out of the fall, a threat continues to rise on a new front.

As the Allied Forces focus on ending World War II hostilities, Captain Butcher gets the green light to begin a top-secret campaign known as Operation Vulcan.

Vanguard — Special Operations Task Force (S.O.T.F. 001) — only delayed the inevitable with Operation Phoenix, as Axis scientists and leaders fled to the South Pacific. The four core forces from Vanguard – Hellhounds, Sentinel, Barbarian, and Shadow — were strong, but none of them, even within the Pacific, had enough intel on this uncharted island known as Caldera.

With their respective elite backgrounds combined, and the winter trade winds at their back, all three members of Trident and Captain Butcher charted a course for Caldera. Unbeknownst to them, the Axis were prepared to shoot down unidentified aircraft on sight with anti-air guns stationed on Caldera’s beaches, taking down Butcher’s pride and joy while splitting him from his newly recruited forces.

Despite counterattacks, Trident survived and regrouped with Captain Butcher, who happened to land right on whatever the Axis were hiding…

Rise on a new front and discover this secret in Season One of Call of Duty: Vanguard and Warzone Pacific, a massive island-sized introduction to another incredible year for Call of Duty — complete with free weapons, maps, Operators, and more content, especially for Vanguard owners.

Season One will begin on December 8, following updates to Vanguard and Warzone. Vanguard’s update is scheduled for December 6 at 9 PM PT. Warzone will schedule its update for when it shuts down its servers from December 7 at 9 PM PT to December 8 at 9 AM PT to prepare for Warzone Pacific.

From all the free content across Multiplayer, Zombies, and Warzone Pacific, to new innovations within the Battle Pass system and 24 hours of exclusive access to the new Caldera map for Vanguard owners in Warzone Pacific, this is everything you need to know for Season One:

– Vanguard Owners Drop in on December 8. Play the new Pacific map, Caldera, a day early by owning Call of Duty: Vanguard. Rebirth Island will remain live during this time for all other players.

– The Battle Pass: The Best Value Gets Better. Three functional weapons, two Multiplayer Perks, new Equipment in Vanguard, as well as other unprecedented free items in Tiers and dozens of other items in the full Battle Pass.

– Tips of the Three-Pronged Spear. S.O.T.F. Trident is prepared to pierce through the Pacific, with Francis “Kai” Lanakila arriving first with the Season One Battle Pass.

There’s still time to be the first to drop into Caldera, the brand-new map launching with Warzone Pacific.

Purchase Call of Duty: Vanguard before December 8 to participate in a 24-hour Caldera exclusive access event in Warzone Pacific, which begins on December 8 at 9 AM PT. Digital copies of Vanguard come with immediate access to Caldera during its 24-hour exclusivity period, while those who purchase a physical version must install and boot Vanguard and get past the initial interactive screen to gain access to this Warzone Pacific event.

More intel about Caldera can be found in our overview blog here.

Prepare for a Whole New War with the Battle Pass

Time to restock that arsenal for the Pacific.

– Over 30 Free Items, Including Some for Clans. 300 COD Points, Weapon Blueprints, and more. Earn even more items by joining a Clan with friends, then party up to get that 10% global XP boost.

– Trident’s First Operator: Francis “Kai” Lanakila. Here for a good time, not a long time. Purchase the Battle Pass to unlock him immediately at Tier 0.

When Butcher needed to hunt down the Axis on Caldera, Francis “Kai” Lanakila was the first man he called… even if he likes to show off just as much as hotshot pilot Wade Jackson.

As passionate in battle as he is for food, friends, and thrills, Francis learns quickly from mistakes and knows to move on to the bigger missions ahead. He fights to help others in need… but he always wants to make sure he looks good doing it.

His favorite weapon is the Cooper Carbine, one of the three new weapons within the Season One Battle Pass. Use it to rank up quicker through this 20-level Operator XP progression path, which includes XP bonuses, two new Skins, and a tasty “Kalua” Pork Weapon Charm among other rewards.

Francis and his default “Kingdom” Operator Skin are automatically unlocked at Tier 0 with purchase of the Season One Battle Pass.

– “Alleyway” Arthur Kingsley Skin. Dive into the Pacific prepared for the heat with this new Skin for Vanguard’s leader.

– Season One XP Boost. Enjoy a 10% increase on Player XP throughout Season One.

Those who want to get access to up to 100 Tiers of the Battle Pass — and do so with a head start — have another reason to pick up the Battle Pass Bundle: the Legendary “Battleprepped” Operator Skin for sharpshooter Polina Petrova. Although the gas mask is not functional against Caldera’s circle collapse, your presence will be even more menacing to those trying to escape it while wearing this gear.

During Season One, all of Trident will make their presence known in Warzone Pacific, Multiplayer, and Zombies, starting with Lewis Howard before the end of the year.

Lewis Howard survives even against insurmountable odds, being drafted into the war with zero knowledge of weaponry before becoming the USA’s deadliest sniper. His preferred weapon is the Gorenko Anti-Tank Rifle, also featured within the Battle Pass.

After the New Year, Trident will be complete when close-quarter battle (CQB) specialist Isabella Rosario Dulnuan Reyes joins the fray.

Get Lewis and Isabella in their own featured Bundles, set for launch during Season One. Those who have all three members of Trident and level them up to 20 will get special gold-trimmed outfits, as well as some incredibly badass Diamond Operator Skins if they maxed out all 12 Operators from the other four Task Forces.