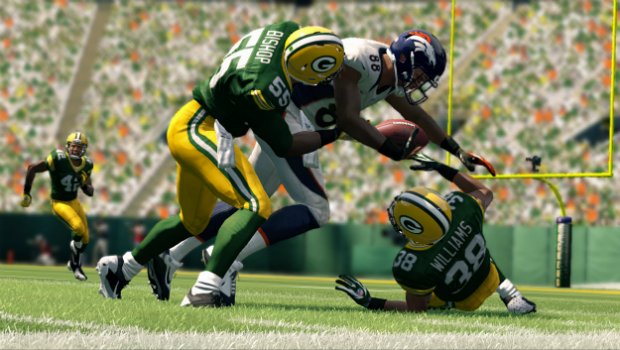 The second installment in the Madden Playbook has been released, showing players the myriad of ways the defense has been made stronger and quicker in Madden NFL 25. The video stars ESPN’s Trey Wingo and San Francisco 49er Novarro Bowman as they discuss the nuances of defending against running backs over clips of the upcoming Madden video game.

The largest changes showcased in the video is the updated way defenders line-up for the play. Instead of marching to set positions within a play, defenders will line-up more appropriately for their individual defensive assignment. In addition, defenders will no longer shoot for the gap without hesitation, allowing for more patience on defense and less over-shooting and mistakes made at the line of scrimmage. The pursuit mechanics have been tweaked as well, sending defenders on more accurate lines towards the ball carrier and enabling more opportunity for agile, quick linemen to catch up to runners down the sidelines.

New heat-seeking tackling allows for one-button defense, something that allows players to make few mistakes without taking complete control away from them. Perhaps the best part of the new mode, essentially an auto-pilot for linebackers and linemen, is that in-game statistical awareness and football I.Q. will come into play. A player like Patrick Willis will shoot the gap correctly almost every time in heat-seeking tackle mode, whereas a rookie undrafted free agent will make more mistakes in traffic. These key changes give a lot of game-changing power to the side of the ball that wins championships.

Madden NFL 25 will be available on Tuesday, August 27, for Xbox 360 and PS3, and fans can learn more at the Madden website. Fans are also invited to become a Madden Insider for exclusive information on Facebook including the latest news, original content and more for Madden NFL 25.