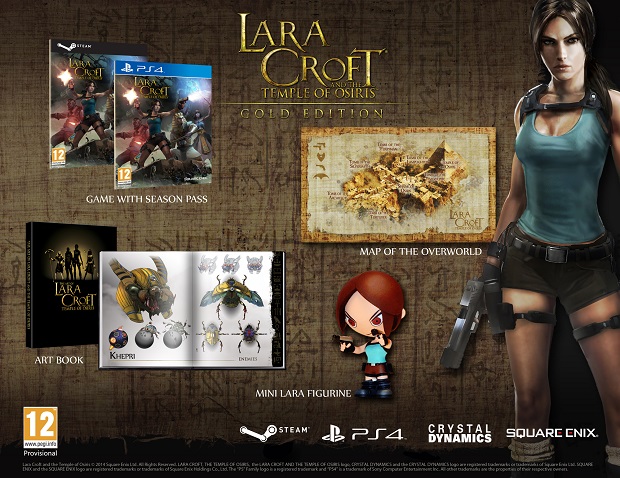 The collector’s edition of Lara Croft and the Temple of Osiris has been revealed, but strangely enough, it doesn’t seem like Xbox One players are getting it.

The Gold Edition of the game comes with a 3-inch figure of Lara, with a map of the game’s over world and an art book.

Also announced was the game’s season pass, which will grant you access to all the game’s upcoming DLC, including new costumes, tombs to raid and new equipment.

Buying from certain retailers will grant you one of three exclusive costume packs, including a couple crossovers from Hitman and Deus Ex. Those who buy the game on Steam will get the Hitman Pack that comes with skins based on the Hitman series, while Amazon customers will get a Deus Ex pack that lets players wield Adam Jensen’s combat rifle. GameStop customers won’t get any crossover content, but will get the Lara Croft Legend pack that includes costumes based on previous Tomb Raider games.

Lara Croft and the Temple of Osiris was revealed at E3 this year alongside the mainline Tomb Raider game Rise of the Tomb Raider. The game will come to PC, PlayStation 4 and Xbox One on December 9th.