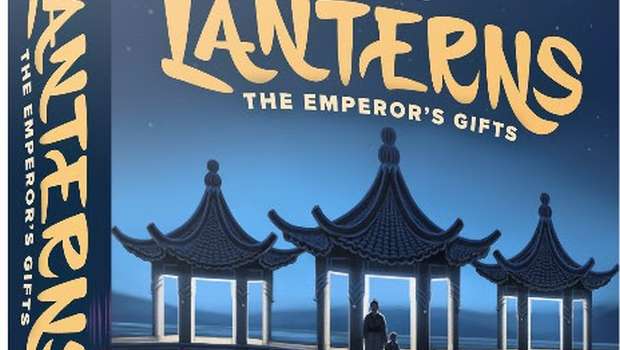 Lanterns has had great success with many awards.  The tile-laying game has a unique system where the position of how the tiles are laid matter to how points are distributed.  Now Lanterns is getting an expansion coming out early next year.

Renegade Game Studios™, the premier publisher of original games and partner Foxtrot Games, are proud to announce that the first expansion for the smash hit game, Lanterns: The Harvest Festivalwill be released in January 2017.

The emperor has declared that pavilions shall be constructed among the lanterns floating on the lake for this year’s festival. Place pavilions to earn gifts from the emperor, and redeem those gifts for powerful actions to make this the best harvest festival yet!

In this expansion, designed by Jason D. Kingsley, players have a small supply of pavilions. When you place a tile, you may choose to build a pavilion on that tile. When you make a color match on a pavilion, you earn a gift from the emperor, a new currency that can be redeemed on new actions defined by emperor cards.

Each game, two Emperor cards are revealed from a small deck. Each turn, each player can redeem two gifts to activate one card and perform the special action associated with it: make an extra dedication at the end of your turn, convert favor tokens into victory points, etc. These actions increase the variety and the puzzliness of the base game.

“We have been blown away by the positive reception for Lanterns: The Harvest Festival. We know that there are a lot of players out there who were introduced to modern board games with Lanterns. They’re now ready for a few more interesting choices and new paths to victory in the game. ” says Renegade President Scott Gaeta. “The Emperor’s Gifts adds these new options to the game without taking away from the elegant simplicity of the original game.”

Look for Lanterns: The Emperor’s Gifts to hit  stores in January 2017 with an MSRP of $20. Lanterns: The Harvest Festival is required to play. Each game takes about 30 minutes to play and is for 2-4 players ages 8+.

A nice price for the expansion, and it sounds like it will give a couple of extra choices without changing the gameplay too much.  Hopefully they’ll make their January 2017 date.