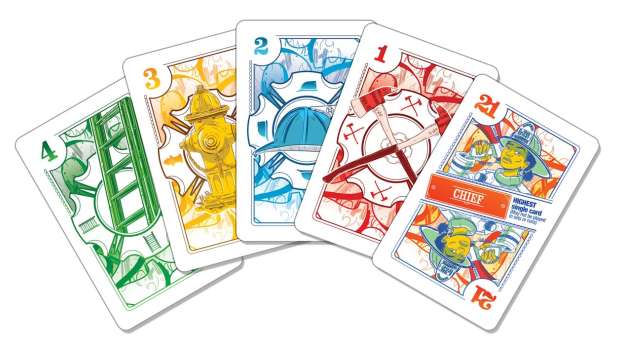 Trick-taking games can be an easy gateway to hobby gaming for those familiar with similar games using a standard 52-card deck.  Different areas and cultures seem to have their own unique take on the genre, with different suits or ranks made trump.  Green Couch Games is going to throw their hat into the trick-taking ring with Ladder 29.

Taking a cue from beloved family card games like Tichu, Clubs, and Haggis, Ladder 29 adds a new challenge to the familiar climbing/trick-taking genre. As experts in the time-honored business of firefighting, players attempt to extinguish their hand of cards while facing difficult challenges that hinder their abilities and choices. Players must decide when to play it safe and when to put it all on the line in this easy-to-learn game that is sure to turn up the heat around the gaming table!

Ladder 29 is played over several rounds in which players are dealt 13 cards each, pass 3 cards to the player on the left, and in reverse scoring order select a Hot Spot Card. The Hot Spot Card details the number of points awarded depending on the position the player goes out and a challenge that applies only to that player for the round. A player may choose to only lead singles, end runs in even numbers, or even limit the types of suites played in sets. The bigger risk taken will provide a bigger reward as the first player to extinguish their hand by playing all thirteen cards wins the round and earns highest points possible on their Hot Spot Card. Play continues until all players, except the player who goes out last,  earn points for their finishing position.

The game is made up of 60 Firefighter Cards, 5 Special Personnel Cards, 16 Hot Spot Cards, 5 score trackers and a score track. Illustration and graphic design is being provided by Andy Jewett whose resume includes work in games and comics with companies like Tasty Minstrel Games, Top Shelf Productions, and the Dice Tower.

Ladder 29 is a game for 2 to 5 players, ages 10 and up and is designed by the seasoned duo of Ben Pinchback and Matt Riddle (Fleet, Eggs and Empires, Floating Market, and the upcoming Wasteland Express Delivery Service with co-designer Jonathan Gilmour). Each games lasts 30 to 45 minutes.

The game is set for a Kickstarter campaign launching in March of 2017 with plans for a Q4 2017 release.

Green Couch Games was founded by Jason Kotarski to release great little games that make great big connections. Ladder 29 will be their 8th release following Fidelitas, Best Treehouse Ever, JurassAttack!, Avalanche at Yeti Mountain, Wok on Fire, Rocky Road a la Mode, and OutLawed!. Jason is also a game designer and co-host of the  20 Minutes of Filler Podcast.

Knowing that this is designed by Ben Pinchback and Matt Riddle makes me interested right away.  They are good guys with solid designs.  Since this is a card game the price shouldn’t be as shocking as a miniatures game, and it will fit easily on your game shelf.  It’s sure to be a hot time when this hits Kickstarter next month.