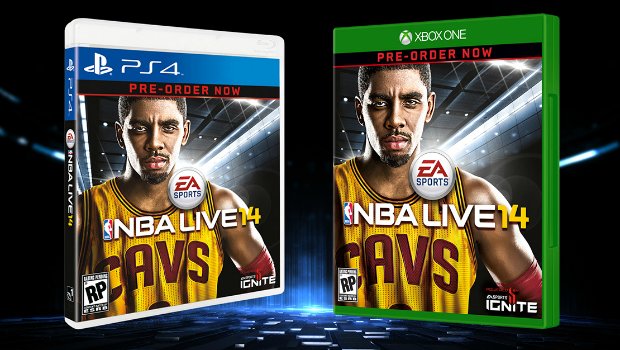 EA Sports has announced Kyrie Irving as the cover athlete for the upcoming NBA Live 2014. Irving becomes the young face of EA’s resurrected franchise, which will be available on the Xbox One and Playstation 4 consoles.

“I’m so proud to be the face of this franchise as it makes its much-anticipated return,” Irving said. “I’ve been on the court with the development team and I’ve seen first-hand some of the amazing things EA SPORTS is doing with NBA LIVE 14. The fans are going to love it.”

Kyrie Irving was the #1 overall pick in the 2011 NBA draft, and has been an electrifying and dynamic talent on the court.  Off the court, Irving has shown some marketability, particularly with his popular (and very funny) “Uncle Drew” commercial series with Pepsi.  EA is hoping that his high visibility and overall popularity can vault their once failed franchise back to the top.

“We couldn’t imagine a better cover athlete for our game than the dynamic, explosive Kyrie Irving,” added Daryl Holt, VP and GM of Basketball for EA SPORTS. “Kyrie is one of the best ball handlers in the league, and with our next-generation technology we can arm players with the ability to replicate his impressive on-court feats, as well as the amazing signature styles and abilities of other pros in NBA LIVE 14.”

NBA LIVE 14 is developed in Orlando, Florida by EA Tiburon and is available for pre-order on the Xbox One and the PlayStation 4 at all major retailers. To learn more about NBA LIVE 14, visit http://www.easports.com/nba-live, and be sure to follow the NBA LIVE 14 Facebook and Twitter pages for breaking news and information.