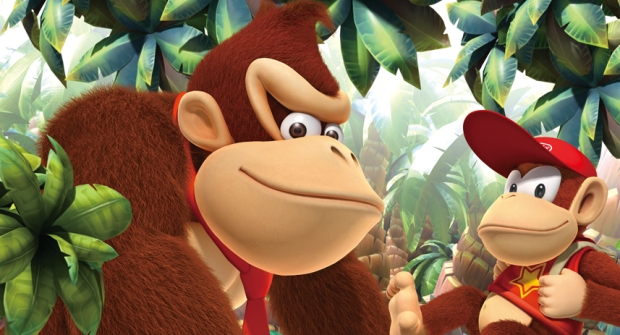 Tomorrow marks the return of an iconic Nintendo franchise – Donkey Kong.  In his latest game, he’ll be retreading the world of Donkey Kong Country Returns (Wii), but this time it’s on the 3DS platform. Nintendo has added new and shiny features, and touts the 3D elements that should work well with the original design.

To optimize Donkey Kong Country Returns 3D for portable play, “New Mode” has been added to the game. In New Mode, players have access to new items and game-play features. These items include portable “DK Barrels,” which players can use at any time to have access to Diddy Kong; “Green Balloons,” used to protect Donkey Kong and Diddy Kong from falling off a cliff or ledge; and “Crash Guards,” which make players temporarily invincible in rocket barrel or mine cart areas. Fans can also play in “Original Mode” to experience the game as it was originally designed.

Exclusive to Donkey Kong Country Returns 3D are eight new, challenging levels located on a cloud that can only be reached by going through the Golden Temple after players complete the main game. Two players that both own a copy of the game can also connect via local wireless to team up as Donkey Kong and Diddy Kong for some barrel-blasting, rail-riding, ground-pounding multiplayer action.

Nintendo also announced an event at the Los Angeles zoo from May 24-27. An interactive gorilla experience is scheduled as well as the ability to play Donkey Kong Country Returns 3D.

Hit up the official web page for more details on the new modes and abilities.