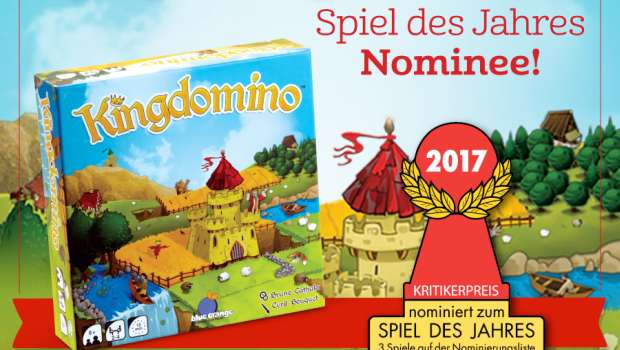 The Spiel des Jahres announced every year are a huge boon to the board games that are nominated.  While this often is geared towards the European market, the world takes notice.  Blue Orange has had one of their games nominated this year, Kingdomino.

Blue Orange Games is proud to announce that one of its newest games Kingdomino, by Bruno Cathala, has been nominated for the coveted Spiel des Jahres award. Each year, the Spiel des Jahres is given to a family board game new to the German market.

Although the Spiel des Jahres is awarded in Germany, it is recognized internationally amongst the board gaming community as the reigning authority on deciding the standouts of the year. Magic Maze and El Dorado are the other two games in the running for the award; the winner will be announced July 17th. A panel of German gaming experts and critics, who evaluate the games looking for the best design, rules, layout, and overall gaming concept, decides the winner. Last year’s award winner was Codenames, and notable past award winners include Carcassonne, Catan, and Ticket to Ride. In 1989, the Kinderspiel des Jahresaward was added to recognize the best children’s game of the year, and in 2011 the Kennerspiel des Jahres award was added to recognized more complex board games.

“We are extremely honored that Kingdomino has been nominated for the Spiel des Jahres this year,” says Blue Orange Games’ Vice-President of Sales and Marketing (USA) Martin Marechal, “It has proven to be popular, both in the United States and all other international markets, and it is exciting to see it receiving well-deserved recognition from such a distinguished award organization. Kingdomino is extremely accessible as it is a game that children starting age 6 can play and we believe it has all the ingredients to become a “classic” for the many years to come”.

Kingdomino is a tile-laying game by celebrated game designer Bruno Cathala. It made its international debut at Essen 2017, and was later introduced to the United States market. In the game players take turns selecting and then adding a new domino to their existing kingdom, making sure at least one of its sides connects to a matching terrain type already in play. The strategy of the game is present in the tile bidding mechanism. Players must decide how valuable certain tiles are to them, as the selection of tiles determines the order of tile choice for the next round. The game ends when each player has completed a 5×5 grid, and then points are counted based on the number of connecting tiles and point-doubling crowns.

Kingdomino is currently available internationally in stores, and on Amazon.

I’ve heard nothing but great things about Kingdomino, and it will be at Origins.  If you haven’t gotten a chance to play it yet, that should be a perfect opportunity for you to try it out.