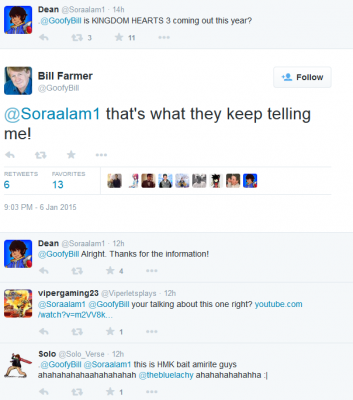 Yesterday on Twitter, Bill Farmer took time to respond to fan requests pestering him for Kingdom Hearts III info. Farmer, the voice actor for shield-wielding Disney dog Goofy, tweeted that KHIII was indeed set to release within the year.

Farmer went on to say that he “can only tell you what [he’s] been told,” and that he has finished voice work for KHIII. He has assured fans that it is not the rumored KH3D (also known as Dream Drop Distance) remake, but rather the full-fledged third installment to the franchise.

Also, when asked which world he was most excited for in the new game, his response was “All of them.”

A still image featuring Sora holding a Keyblade, from E3 2013.

Kingdom Hearts III will canonically be the third installment to the franchise, but fans have been waiting a long time for this, as there hasn’t been a numbered release since Kingdom Hearts 2 for the PS2 in 2005. Most games since then have been side-stories or prologues.

Stay tuned to Gaming Trend as we keep our eyes peeled for more info on KHIII, and if you’d like to see what our staff most wants in a new Kingdom Hearts game, you can check out our feature here.