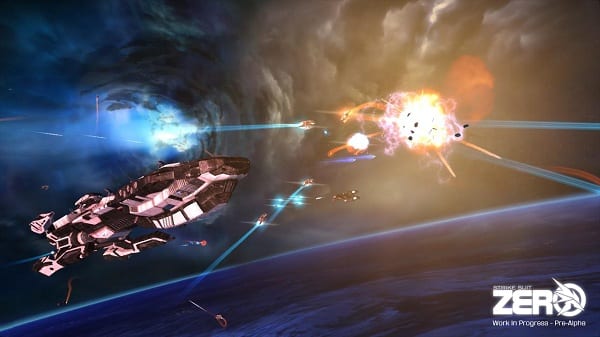 You all know how much I like mech games, but I have to be honest–I was a bit worried about Strike Suit Zero.  When I first saw it, I thought it looked like a knock off a really mediocre Robotech game, but as time wore on it just looked better and better.  And now, after one of the more successful kickstarter campaigns, Born Ready Games has announced that it’s third person mech-action game  is now available on Steam.

What did the Kickstarter campaign net us? Well, according to Born Ready’s press release, it got a bunch of really awesome names together:

Strike Suit Zero promises to delight fans, due largely to the fantastic talent on board its development team. The game features jaw-droppingly detailed mecha and spaceship designs by renowned mecha designer Junji Okubo (Steel Battalion, Appleseed), and a wonderfully atmospheric score created by Paul Ruskay (Homeworld) and Kokia (Tales of Innocence, Origins: Spirits Of The Past),

If you’ve never heard of Paul Ruskay, or heard the Homeworld soundtrack, you could be forgiven for not understanding why that has me so excited.  Be sure to check out the launch trailer below, and let us know what you think.