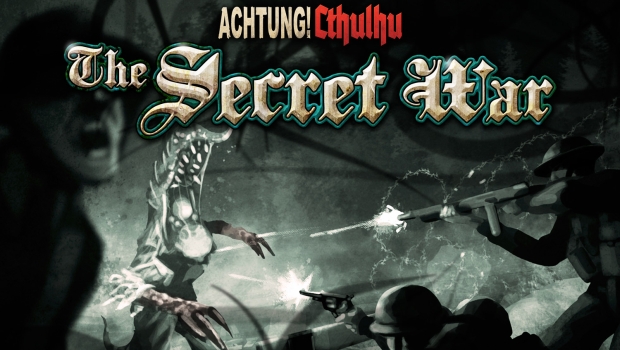 While several games featuring Cthulhu have been brought to the tabletop, Arkham Horror is the game that most synonymous with the Ancient Ones.  Kevin Wilson designed that game, and he is going to take another stab at the Cthulhu mythos, although in an entirely different setting.

Modiphius are at it again, signing Kevin Wilson the designer behind board game classics: Arkham Horror, Descent: Journeys in the Dark, Android, Sid Meier’s Civilization: the Board Game and A Game of Thrones.

Europe is ablaze with the final conflicts of World War Two. As the Allies are caught unaware by a German assault in the misty Ardennes forests, the Black Sun unleash mythos evil from ancient sites, hoping to overwhelm the Allies forces, whilst Nachtwolfe attempt to power up a vast warmachine which will bring about a 1000 year Reich. All the while the dreams of Cthulhu inspire Cultists to rise up in preparation for his return!

As the heroes of Section M and Majestic, you must race across Europe on vital missions facing ancient terrors, recovering strange artefacts, and learning unspeakable knowledge to help defeat the forces of the Third Reich and the Cultists of the Old Gods. To aid the heroes desperate endeavours, the players must learn to command the powerful but over-stretched Allied forces to help halt the tide of evil!

Achtung! Cthulhu – The Secret War is planned for a Winter 2014/15 release.

The setting is so different from other Cthulhu games, that I’m looking forward to seeing how it turns out.  Having Kevin Wilson on board should be a big boon to Achtung! Cthulhu – The Secret War.