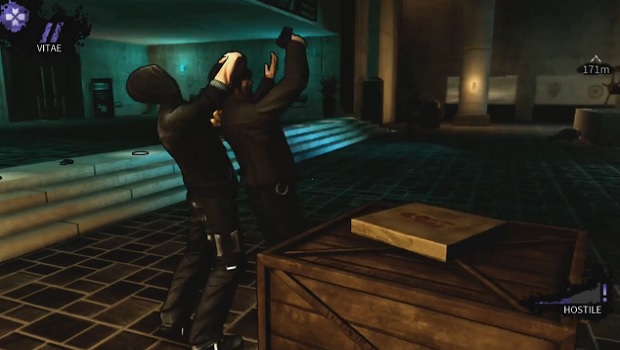 DARK is a vampire-themed stealth-action game coming to PC and 360 later this summer. In preparation for the game’s upcoming release (and of course, E3) Kalypso has released a new trailer for the game. The trailer shows off some of the stealth mechanics and vampiric abilities featured in the game, accompanied by a surprisingly upbeat soundtrack. DARK will be playable at E3 in just a few days and it hits shelves in just a few weeks, so have a look at the trailer for an idea of what you’re in for.

DARK is a stealth action game with RPG elements that lets you slip into the role of the ultimate killer… a vampire. Stalk your enemies from the shadows then use powerful vampire abilities to attack and silently dispose of them! The exciting story of DARK immerses you in a world full of blood and darkness in which the hunter can become the hunted at any time.   As you unravel the mystery behind the omnipresent and powerful global conglomerate, Geoforge, you must continually improve your character by developing powerful skills to aid you in remaining unobserved, or silence those unfortunate enough to take too keen an interest in you.