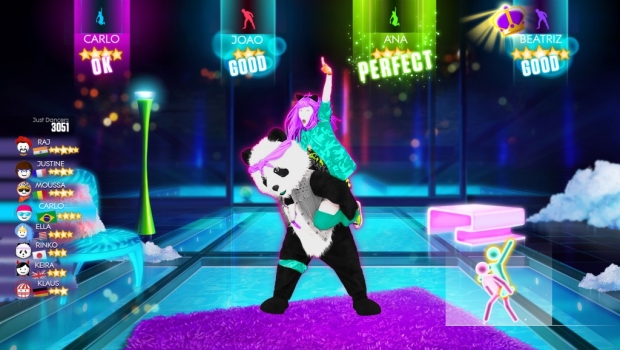 Shipping for what I believe is the flagship version of this game, Just Dance 2014 has shipped to shelves for Xbox One.   SmartGlass support, hands-free dancing, and up to six people dancing at the same time.   Kinda hard to beat that.   Let’s get a closer look at the details:

Today, Ubisoft® announced that Just Dance® 2014, the newest installment of the No. 1–selling dance game franchise,* is now available in the US for Xbox One, the all-in-one games and entertainment system from Microsoft powered by Kinect for Xbox One, and will be available in Europe, New Zealand and Australia on November 22. The game launched on PlayStation®4 computer entertainment system in the US on November 15 and will launch in EMEA territories on November 29. Just Dance 2014 is already available on all current-gen consoles.

Next-gen consoles offer unique gameplay experiences for Just Dance fans. Players on PlayStation®4 system are now able to play hands free using the new PlayStation®Camera. Players on Xbox One can use Xbox SmartGlass technology to navigate through the game’s menu and select songs all from their smartphone or tablet. In addition, Just Dance 2014 is playable with up to six people at the same time with the power of Xbox One.

Just Dance 2014 features more than 45 tracks, including “Applause” by Lady Gaga, “Blurred Lines” by Robin Thicke ft. T.I. and Pharrell, “Kiss You” by One Direction, “Get Lucky” by Daft Punk ft. Pharrell Williams and “Starships” by Nicki Minaj. “Roar” by Katy Perry is also available as a free DLC at launch.

I tackled the review on the Xbox 360, and it did pretty well!   You can check out my review right here and look for this title on the shelves for Friday.