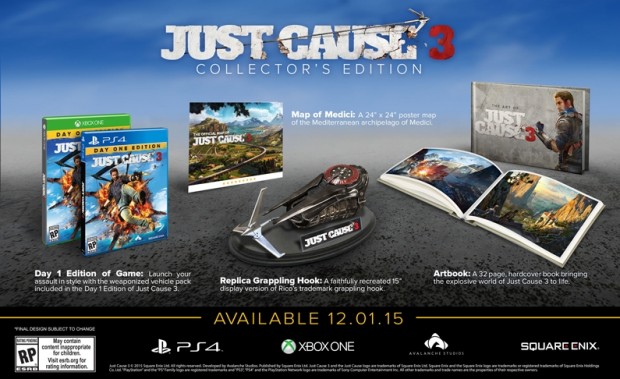 Square-Enix and Avalanche Studios have revealed the Just Cause 3 collector’s edition, and it features items that were voted on by fans after being given some options earlier this year.

The $109.99 collector’s edition features a 15-inch replica of protagonist Rico Rodriguez’s grappling hook, which was chosen over items like a backpack and a statue of Rico.

Alongside the grappling hook, those who order the collector’s edition will get a map of Medici, an 32-page hardcover artbook, and Day One Edition of Just Cause 3 that comes with exclusive content.

Square-Enix’s North American site only has the collector’s edition up for pre-order on PlayStation 4 and Xbox One, but the European site also lists the edition as available on PC.

Just Cause 3 is coming to PC, PlayStation 4, and Xbox One on December 1st.